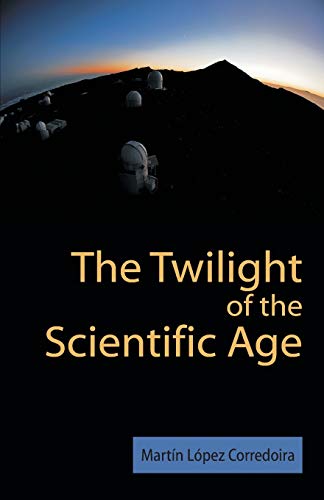 Book Review: The Twilight of the Scientific Age by Martín López Corredoira, Ph.D

about this book: "The Twilight of the Scientific Age" is a challenging book-length essay on the present-day state of science and its future. A wide audience of educated people interested in it, and the philosophy and sociology of science, will respond to the revolutionary ideas expressed here, as things they have thought about but not dared to say out loud.

The present-day decadent situation of science can be summarized as follows:

1) Society is drowned in huge amounts of knowledge, most of it being about things of little importance for our cosmic vision, or producing no advances in the basic fundamentals of pure science, only technical applications or secondary details.

2) In the few fields where some important aspects of unsolved questions have arisen, powerful groups control the flow of information and push toward consensus truths rather than having objective discussions within a scientific methodology; it gives few guarantees that we are obtaining solid new truths about nature. This book illustrates for instance the repression that must be laid at the door of the established scientific communication system (publication and peer review).

3) Individual creativity is condemned to disappear in favour of big corporations of administrators and politicians of science specialized in searching ways to get money from States in megaprojects with increasing costs and diminishing returns. Progress in science requires more and more resources to achieve smaller and smaller results, and thus science has to decline. The kingdom of bureaucracy and money triumphs whereas the ideals of the search of great truths decline.

This is a courageous book. The author, a scientist, questions the validity of the scientific research of today, and of science in general, in the context of the present-day society. With compelling arguments, it is suggested that science is in decline. The book reminds of the famous Spengler's Der Untergang des Abendlandes from the 1920s.

The book offers an interesting, challenging reading, both for professionals and the general public. [by M. Apostol]

Video: The Twilight of the Scientific Age by Martín López Corredoira, Ph.D