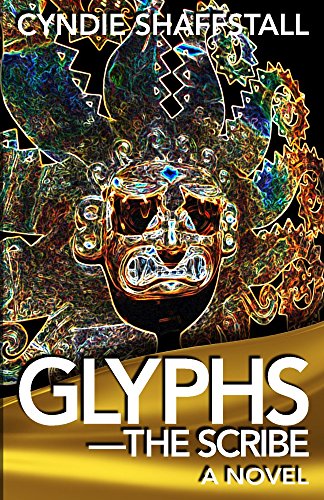 about this book: Glyphs is my second novel after a long line of non-fiction, and my favorite book so far. In 2013, I visited Peru and hiked the Andes for two weeks, and it was a life-changing experience. I learned quite a lot about the people of Peru—the Inca and the Wira who preceded them—and became interested in the origin of their religious beliefs. I've also read about the ideas of ancient astronaut theorists on the topic of the origin of these gods.

What fascinates me most is the entire region has no written word and yet history survives in the legends told throughout the generations. Without writing, it's unlikely we will ever know their history with a high degree of certainty, but my book is a story of what may have happened to their records. The legends that form the foundation of my story are also contradictory. In some, Wiraqucha was the creator of giants, but in others it was Paricia, and Wiraqucha followed him. Where stories conflicted, I chose the version I liked best and wove them to create my own version of their history.

There are many things in my book incongruent with timelines suggested by archeologists—mostly concerning the construction of their cities, but there are also many things that, though unbelievable, are true. A good example is that the Wira and/or Inka performed (sometimes multiple) brain surgeries on people who continued to live.

I tried to include words of their native language where possible, avoiding Anglicized versions since these were translations provided by the Spanish after their invasion of Peru. Though, like the legends, there is discrepancy over which version is correct.

In my story, Wiraqucha, the creator god, chooses not to destroy the people and empire he has created, and rather appoints others to watch over the empire so he can continue his sky travels. The appointed custodians are now also returning to the sky—meaning the human forms of the gods will no longer have a presence on earth. What's more, the sun god, Inti, succumbs to the ravages of the human form before the others leave.

Pascac, his son leads villagers to settle in Sacsayhuamán, the sanctuary overlooking Qusqu—the capital city built by the god of civilization, Manqu Qhapaq. Despite their will to live and prosper, the new settlers may not survive in their new home. Supay, the god of death, and other gods rage against them—seemingly intent upon wiping out the entire civilization and those who rule them.

The scribe, one of only a few who knows the ancient art of glyph drawing, endures hardship and tragedy to fulfill her life's purpose of recording the history and creating books so Wira descendants will know the story of how they came to be.