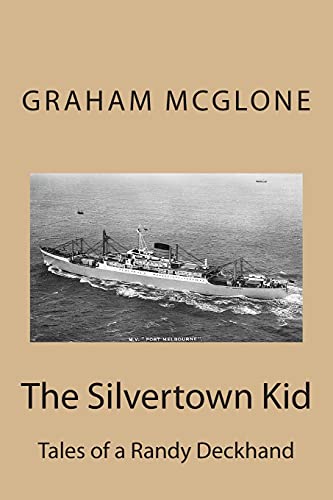 Book Review: The Silvertown Kid - Tales of a Randy Deckhand by Graham Mcglone

about this book: The author was born in June of 1946 at Silvertown in London's war-torn docklands. He began his long sea-going career aged just 17, and for the next 44 years sailed in Britain's Merchant Navy, serving from deck boy to captain.

Over the years, friends and colleagues, after hearing his extensive tales of life upon the oceans, had badgered him to publish his story. After mountains of research, and several re-writes, it was ready to be told.

This then, is his story of those days spent aboard the cargo ships that ploughed across the oceans to far flung and exotic ports. He was a shy lad, but quickly transformed into a self-assured pursuer of girls. No females were safe as he would assail them like a marauding Viking, pillaging and looting their chastity.

But this is more than just about his love life. The book overflows with stories of quirky shipmates, of exotic ports-of-call, boozy bars, storms and icebergs, and of the history and scenery of the many places he visited. Perhaps, the saddest of all, are the reasons why,in the 1970's, the British Merchant Navy's conventional cargo vessels were overtaken by the container ship.

Should be called tall tales

Interesting as a description of a lost trade but spoilt by the never-ending tales of affairs and sex with women who all seem to be attractive, not an ugly one among them! The author never seems to fully develop his own character in a true autobiographical manner, as a reader I needed more of a reason to bond with his story. Here was a young man who drank too much and had sex with whoever let him. And that's about it. The voyages of course all become much of a sameness after a while but a description of a major storm encountered was well-written and managed to convey the fear and apprehension the crew must have felt. I also felt that simply cutting and pasting information from Wiki etc. on historical and geographical matters was far too brittle in its use. He needs to edit his descriptive words of people who do not share his skin tone or sexual orientation as its very old fashioned and backward to describe people as coloured or pooftahs. [by Graham Fellows]