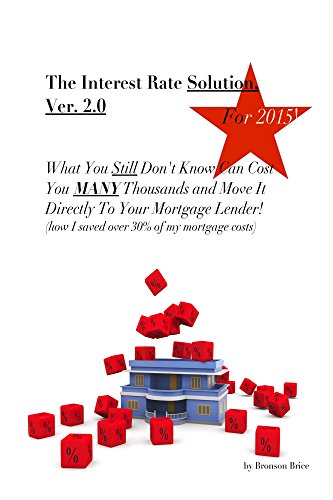 about this book: So, what would have been your response two years ago if someone had mentioned 'negative rates'? If you recall, at that point, it was only one year from the 'doubling' of the ten-year treasury note from the previous year. Everyone, including the experts, were sure that rates were only going higher.

At that same time the original version of 'The Interest Rate Solution' was telling you how the author, Bronson Brice, had ignored this kind of chatter over TEN YEARS ago, to correctly anticipate the trend in interest rates, saving him hundreds of dollars EVERY MONTH with his 2003 decision. Also at that time, Bronson Brice determined that in a housing market valued at $10 TRILLION, according to Federal Reserve estimates, over $200 BILLION in interest income could

be saved, if only 10% of homeowners saved only ONE HALF of what he had already saved between 2003 and 2010. That's TWO HUNDRED BILLION dollars in personal income that could have been used to pay down other debt, keep people out of bankruptcy, pay college expenses, retire workers early, and so on, and so on.

To further grasp the absolute magnitude of diverting over $200B back into the consumer pockets, you'd have to envision returning an additional 66% on top of all tax refunds for the year 2016.

The fright, terror and uncertainty that contributes to anxiety loaded decisions on big money purchases, and grabbing the wrong interest rate packages on those purchases, is costing the average consumer REAL MONEY!

Rather than to continue to try to follow the very short-term, week-to-week decisions shouted about in the news, you can change your grasp on how the interest rate game operates, once and for all. You will no longer be a pawn to the mixed signals from opposing articles and news stories that keep so many consumers constantly off guard.

Make the move toward more understanding and more more certainty by getting your hands on this unique and accurate view.

Interest rates can be a complicated topic when presented in it's traditional format. Bronson Brice is making the case of where rates are, and why, where they're going, and why, and what you need to do in the future to keep a laser-guided view of what to expect next.