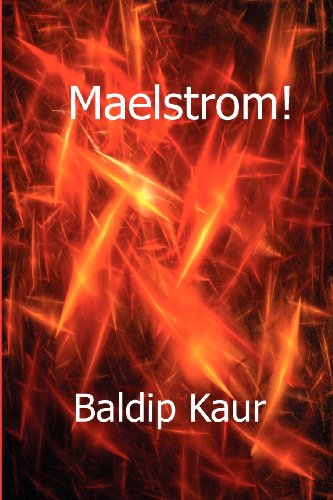 about this book: Maelstrom is a fictional novel in which most of the characters are struggling with their personal demon and have conflict either internal or external. Although set in London, has flashbacks going back to a troubled state in India.

I was inspired by a piece of news that patients were being let out of hospital before they were fully recovered and how they and sometimes innocent suffered because of this.

As it is set in London and has flashbacks going back to India, it would make interesting reading for people from both countries. And as everybody has had somebody in their family suffer or know about somebody who has, can empathise. As the book also has philanthropist characters that highlight injustices, it would be of interest to anyone interested in social issues. Crime readers would also find maelstrom interesting as it has mystery and crime and most of the characters have

It took me about 6 months to write but about 10 years to edit and re-edit.

Because there is a 'storm' of sorts going through the minds of the character, I thought 'maelstrom to be an appropriate title and the cover shows depicts storm and lightening!

I did not find it hard to write maelstrom, e.g. regarding theme plot etc...the hardest part for me was correcting the grammar!

A lot of research was done for maelstrom, for although the characters are fictional, as is the storyline...illness faced is not and neither is the background to living in a troubled state and its consequences. This involved a lot of reading and visits to the library and researching online. Added to this was being observant and sensitive to the views of people from a troubled state.

I have learnt a lot from writing this book. I am more sympathetic to people from troubled areas and the effect it has on them, more tolerant to people suffering from their mental demons and I hope that it will have the same affect on anybody reading 'maelstrom.

Injustice can lead to mental illness

This second novel by Baldip Kaur scans the lives of women both in England and India. She shows how inequalities and injustice in society can contribute to emotional and mental illness in those who are subjected to oppression. This fictional account is about young Indian women who have attempted to oppose rigid and aggressive social and cultural norms. The author's passionate but sensitive endeavour to raise consciousness and awareness is evident on reading this book.

Video: Baldip Kaur - an author and an artist