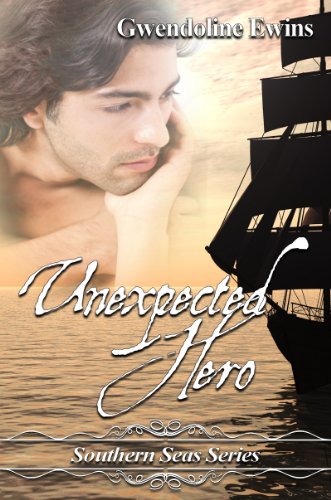 about this book: "Unexpected Hero": Perception fascinates me, especially the way it can rapidly change. Charity Trescothick is apparently a dutiful daughter living in the shadow of her missionary parents, assisting their work by learning the local dialect, teaching in the mission school and coping valiantly with the loss of her brother.

From her point of view, Sebastian Churnside is a cuckoo in the gregarious Churnside nest. Whereas every other Churnside sails the southern seas, he gets seasick at the sight of the sea. He never leaves Sydneytown. Worse, he is aloof.

But in 1866 Mrs Trescothick dies and when the news reaches Trescothick friends in Sydneytown the only one able to sail to their aid is Sebastian. Agonising weeks later Sebastian staggers onto the sand and immediately Charity's perception of him is challenged. As he recovers from his ordeal, his perception of her changes too: each finds the other much more than either a dutiful daughter or an aloof businessman.

"Unexpected Hero" is set in 1860's Polynesia when the London Missionary Society had established schools on just about every scrap of sand where people could live. The schools were remarkably successful, attracting adults as well as children, and leaving a legacy of some of the most beautiful script ever seen.