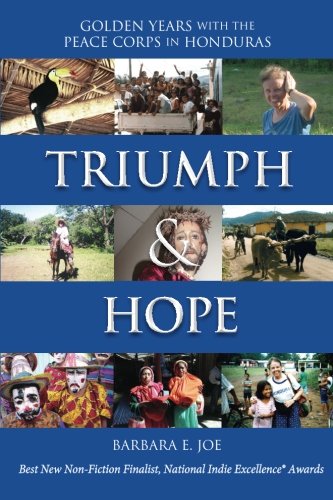 about this book: Joining the Peace Corps was something I'd always dreamed of doing ever since 1961 when President Kennedy first announced the corps' formation. But life intervened and I didn't actually join until 2000 when I was 62, inspired by Miss Lillian, President Carter's mother, a Peace Corps volunteer in her 60's in India. I had recently suffered the untimely deaths of my son and a foster son and needed to find a new purpose in life; Peace Corps offered that opportunity. I went as a health volunteer to Honduras, a country I had first visited as a toddler in 1941 when my father worked at the Mayan ruins of Copán. A male friend sternly warned, "You'll never make it; mark my words, you'll be home by Christmas at the latest." But I extended beyond the usual 27 months and stayed 3 Christmases! I even started a support group for over-50 volunteers called OAKS, for Older And Knowing Souls. While in service, I posted a monthly Letter from Honduras on a website. Three readers I'd never met before visited me as a result and, when I came home, regular readers urged me to combine the letters into a book. The result is "Triumph & Hope: Golden Years with the Peace Corps in Honduras," with "Triumph" referring to my first Peace Corps site, El Triunfo, and "Hope," to the second, La Esperanza. The book's cover is rendered in the blue and white of the Honduran flag interspersed with my photos of everyday scenes and more photos appear throughout the book. My book was declared "Best Peace Corps Memoir of 2009" by Peace Corps Writers and The Washington Post's Ed O'Keefe said, "Barbara's book is a great read… Buy and read this book, no matter your age." As an adventure story, it has appealed to people in walks of life, not just potential volunteers, showing that it's never too late to embark on a new path, even after experiencing a terrible loss. When I returned home, I started a new career as a Spanish interpreter in hospitals and schools, something I'm still doing at age 74. And I still return yearly to Honduras (8 times so far) to volunteer with medical brigades and other projects begun while I was in service.

An engrossing account of a 3-year stint in the Peace Corps in an impoverished Central American country that seldom makes the headlines and for that reason deserves attention. This candid, often surprising memoir was written to inspire older people, women especially, to consider putting their life's accumulation of skills to work in the service of a Peace Corps host country. Volunteers of any age will find this a practical survival manual.

Golden Years With the Peace Corps in Honduras

This is an interesting account of the author's refusal to let her age stand in the way of a dream she had always had of joining the Peace Corps. It is a sometimes amusing, sometimes moving, and always painfully honest and fearless. When you finish the book, you will have learned more perhaps than you wanted to know about the lives of the very poor in Central America, as well as about the present day Peace Corps.

After reading this book I was intrigued with the entire Peace Corp mission. Although I am much younger than Ms. Joe, I don't think I would be able to adjust to the hardships and danger she faced. What a wonderful read, grasping attention from the beginning. A MUST for ANY member of the Peace Corp, as well as those looking to enter the service. I doubt any material they provide would be as forthcoming and honest as Ms. Joe! [by Adarryl]