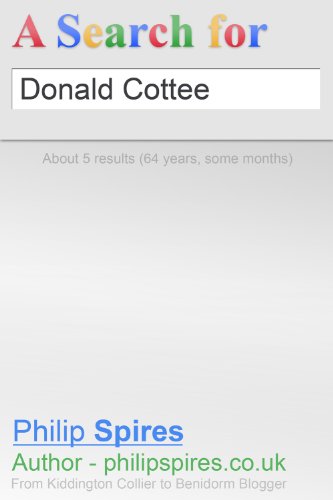 Book: A Search for Donald Cottee by Philip Spires

about this book: A Search For Donald Cottee is a parody of Don Quixote. It's a comic novel that ends in tragedy, but no more of a tragedy than that mundane ending that the Don eventually suffered. It's set in Benidorm, on Spain's Costa Blanca. Donald - Donkey to friends and enemies - and his wife Suzie have retired early to the sun. They seek a life of relaxation, beach, shorts, wine and line dancing. They have parked their mobile home, Rosie, on a Benidorm camp site and now await their imagined heaven. They are so keen to share their new-found bliss that they become internet-savvy and blog about their experience. Their joint blog the basis of the book, but not all of the book, for reasons that only the reader will discover.

Don and Suzie, however, find it hard to become released from their past. They originated in a former mining village in West Yorkshire in the north of England. Don has pursued every self-education course under sun and has recently taken up environmental campaigning. He is particularly opposed to windmills. Suzie has suffered recent illness, but she seems to be over the worst. All seems to be going well, until an old flame called Mick Watson reappears in her life. Things get more complicated when Mick makes Suzie an offer she cannot refuse. It is her chance to shine in the way she always knew she could. She grasps Mick's offer. It seems she grasped a few others in the past as well.

Don and Suzie reflect upon the present and the past as their future approaches at speed. They find themselves bound up in power struggles they previously could hardly have imagined. Don experiences a kind of paradise in a cave in Montesinos, and he finds an army of sheep coming out of a disco. And then there's the windmills. Suzie's Castle is built and goes from strength to strength. But is Olga really the daughter of an ex-Soviet circus tight-rope-walker-defector, brought up in Benidorm? And why should Don, at his age, become so obsessed by her mere presence? Perhaps it's the way she dresses for work, if work is the right word.

Donkey Cottee and Poncho Suzie become a modern day, internet-based image of Don Quixote and Sancho Panza. There is a local voyage of discovery. But then none of us ever gets very far from home.