Book: You Can't Keep A Good Man Down by Sally Hunter

about this book: Do you have Parkinson's Disease? Are you worried about the future? Or do you know someone who has Parkinson's? Are you a health professional?

Then this book will interest you, as it is about a journey through Parkinson's and out again with the help of Deep Brain Stimulation. It is a very personal account, showing aspects you will probably be able to identify with if you have Parkinson's.

Geoff Sykes is a fun-loving larrikin and go-getter, who rose to become a senior bank manager before he was laid low with Parkinson's. His desperation with the illness and his innate get-up-and-go inspired him to try Deep Brain Stimulation (D.B.S.).

D.B.S. is brain surgery which implants electrodes in the brain and attaches them to a stimulator in the chest. It involves being awake during surgery for several hours, but there is no pain.

After the operation, and after you are switched on, you need considerably less Parkinson's medication, so there are fewer side effects such as dyskinesia (writhing and twisting movements). Even though there are risks with the procedure, everyone I know who has had it, is glad that they did.

This book includes humorous anecdotes about Geoff's younger days, explanations about Parkinson's and D.B.S. and the intimate experiences of Geoff and his wife. It also discusses the role that an arsenic-based sheep dip may have played in causing Geoff's Parkinson's Disease.

The book is easy to read and has also been recommended by a neurologist, who said it was "excellent". Many readers find they can't put it down. 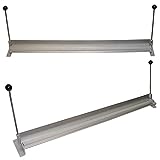