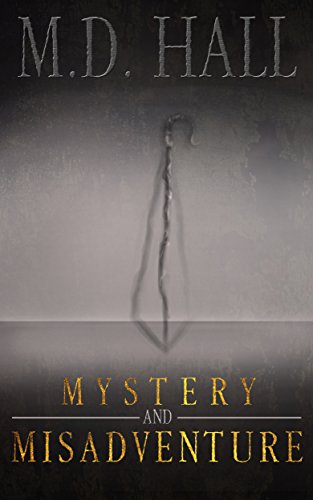 about this book: The idea for this book came in parts. I wrote a short story 'The Ticket' as a result of receiving a parking ticket. I know that my podiatrist likes my stories and gave her a copy. When I returned a month later she confessed to passing it around all her friends who loved reading of the travails of Derek – a traffic warden. In particular, they wanted to know who, or what the old man in the story was ... was he the Devil, or something almost as sinister? That prompted me to write another six stories which, when added to 'Ticket,' resulted in 'Mystery and Misadventure.'

The cover shows, through a fog, a walking stick. This is the walking stick of the old man who appears in all seven of the stories. Not only that, he introduces the stories before bidding us farewell at the end of the collection.

I enjoy writing about Samuel, and teasing the reader over his identity For instance, most unusually for such an old man, his eyes are deep blue.

People have likened the stories to the Twilight Zone or Roald Dahl's 'Tales of the Unexpected' in type ... I'm not so arrogant as to say, in quality!

One of the most recent reviews on Amazon refers to romance and while it wasn't at the forefront of my mind I suppose she is right. Samuel appears to have a unique take on romance, as you will see if you read 'The Program' ...

• "I loved this book. It was great how it had many stories with one tie, An old man with a Morris Minor car. It had nice short stories. I found myself not being able to stop reading. Combines comedy, horror and love perfectly. Highly recommend this book. I was provided with a free copy of this book so I could give an honest review." — Cindy (This is a Must Read): Amazon, November 18 2014.

Take a look at the other reviews on Amazon, they will give a general feel as to how people have reacted. Like most indie authors I have not had the exposure to ensure a viral response to my books and they are unlikely to appeal to fans of young, lusty vampires. Also, if you like blood and guts you won't find it here. Unpleasant things do happen, and not always to bad people, but I like to give the reader enough to let their imaginations fill in the blanks because, no matter how good a writer I might be, I cannot compete with your imaginations.

If you visit my Facebook page you may be confused by the name: Te'an Universe. This is because I have also written a 600 page first volume in a science-fiction trilogy as well as a first volume of three novellas. The two series will link up in their final volumes. A number of people have been patiently waiting for the second volume of the big series, which was temporarily derailed by the anthologies.