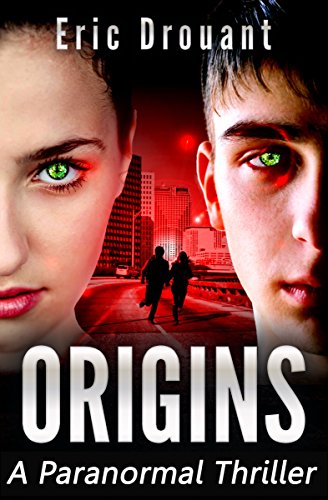 about this book: New Orleans, 1973 - The CIA uncovers two young kids with uncanny psychic ability. A renegade agent wants them for his own. When Ronnie Gilmore and Cassie Reynold fight back, things get deadly fast.

The ability to Remote View makes Cassie and Ronnie high value assets in the Cold War contest playing out in the early 1970's. The discovery of their power sets off a battle that ultimately means full scale war between factions within the government.

Backs against the wall the two young psychics must face overwhelming odds to maintain their freedom and control of their own lives. When push comes to shove, Cassie Reynold proves to be the deadliest 13-year old girl you'll ever meet.

Thorne's agent couldn't believe his luck. He immediately recognized the little girl as Cassie Reynold. They'd been chasing her for two days and she was right here in front of him. He got out of the car. The girl looked tired and scared. If she's here, he thought, the boy can't be far way. Time to wrap things up. Thorne was on his way and it just might be possible to have them both by the time he got here.

"Are you a policeman?" the girl asked. She was a ragged looking little thing, her hair was uncombed, a ribbon on top the only thing keeping it together. Her shirt was dirty. The jeans she was wearing rode on her oddly, pinching at the waist. A dirty streak was on her left cheek and bits of the bushes she had emerged from were caught in her hair.

Oh man, this is going to be easy, the agent thought. He reached into his coat pocket and pulled out his ID, held it out for the girl to see. "Here you go." Cassie looked at it, and said "Do you have a gun?" The agent nodded. "Right here," and patted his coat over his left armpit. "Do I need one?"

"You might. You see that car over there?" she said, pointing to Breed's vehicle. Ronnie was behind the car, heading their way. "That man is trying to grab me and my friend."

He followed her motion, looking over to Breed's car. He could see the boy behind it. Breed was just opening the door, one foot on the ground. By the time his head came back around she was holding a pistol, her finger on the trigger. The pistol was pointing at him. His stomach turned to water.

"Sorry," she said, and pulled the trigger. The shot banged out in the air and his kneecap blew away with it, pieces of shredded pants leg exploding, mingled with blood and bits of tissue. He hit the pavement, grabbing for his leg. He screamed. Cassie took two steps, leaned over and reached into his coat, got his gun. He tried to grab at her, pulled at her head, got hold of her hair. She kicked him in his shattered leg and he screamed again, letting her go. "Tell Thorne we're coming for him," she said.

She stepped over to the car. The keys were still in the ignition and she pulled them out, putting them

in her pocket. There was a radio mike hanging on the dash. Cassie ripped it out and threw it across the parking lot. Ronnie was there now. He took the gun from her hand and put it in his back pocket. Together, they broke for Breed's car.

The reporter was standing by his door with his mouth hanging open. Cassie and Ronnie piled into the back seat with Breed still watching the agent on the ground, blood spreading from his leg.