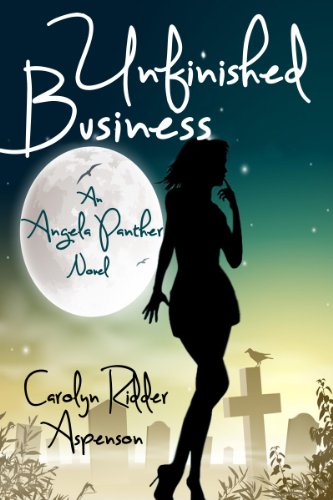 about this book: Ghosts? Ghosts aren't real. At least that's what Angela Panther used to believe - right up until the moment her late mother drops in and cusses her out for stealing her Hershey bars over thirty years ago, just hours after her corpse has been taken away by the funeral home. And if that isn't crazy enough, when Angela's mother reappears, she leaves the door to the other side wide open, tossing Angela down a figurative rabbit hole where her life's jam-packed with dead people. Strangers, acquaintances, close family friends, they all turn to Angela for help, leaving her confused and exasperated. Communicating with the dead is more of a curse than a gift for the reluctant medium and Angela must find a way to juggle her family life with the unfinished business of the dead and keep a grip on her sanity in the process.

Unfinished Business, An Angela Panther Novel is a paranormal-chick lit story told by 40-something Angela Panther, who would most certainly prefer drinking Starbucks and eating red velvet cupcakes with her best friend than relaying messages from the dead. Having her saucy, dead mother hanging around is one ghost too many for Angela but the dead don't really care and they just keep on coming.