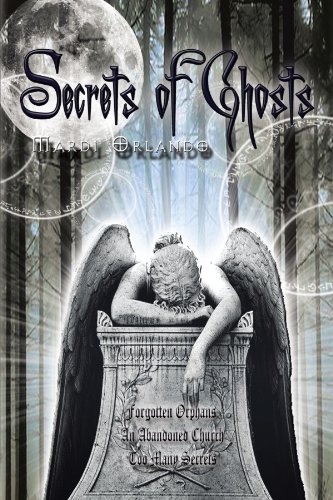 about this book: Secrets of Ghosts is a haunting fantasy for Young Adults involving Paranormal themes, mystery, grief and loss.

I was inspired after reading some stories about WW1 and was shocked at the devastation, massive casualties and all the other issues of the time like illness and starvation. It took me a year to write and has been an incredible experience. The story spans 100 years and there are lots of twists and turns as we view the world in three different perspectives which all come together in a terrifying showdown.

PRESENT DAY
A group of misfit teens are left stranded in the icy wasteland of no-time. They are all from the Secret Society of Gifted Teens, but so far their gifts are hindered by the secrets they all carry. Sixteen-year-old Daffodil has escaped the Institution where she was sent after both her parents died. The abuse she received didn't stifle her gift but it did prepare her for her first mission with The Secret Society of Gifted Teens. And now she finds herself stranded and surrounded by an impenetrable mist with six other gifted strangers, all hiding secrets. When they find a group of ghosted orphans they quickly discover their mission. And that is when the battle for survival begins.

WW1 – 1915
Through static recordings we hear the stories of the ghosts trapped in the abandoned church for 100 years.
"I know that if we fade before we are found we will never be able to go home. If we fade, we disappear forever as if we never existed. That is very dangerous for everyone, ghosted or not."

In WW1, at the age of 14, OSCAR ghosted at the frontlines of Passchendaele where he fled to escape the loss of his entire family. Now, trapped in limbo, he is hiding in an abandoned church with his gathering of ghosted orphans trying desperately to find a way to save their souls. He is more powerful than they know but his determination is more damaging than he realizes. Through Static Recordings they call for help but slowly they are forgetting everything. If they forget to hide from the Shadow it will consume them, taking their existence-time, and that will be disastrous for everyone – living and dead.

BLACKWATER HERALD MOON TRIBUNE 1939
Through newspaper articles we learn about the life of Madame Glizsnort and the curious sightings in Blackwater that caused such angst so long ago. Madame Glizsnort is responsible for trapping the teenagers, for even in death she is not released from her obsession to save her Lost Children. She manipulates the teens' fears so that they will use their gifts and do what she has been unable to – after all she more than a vested interest in the outcome. When she suddenly disappears, the group makes an expedition to the ancient cemetery where they find several unmarked graves and where they discover the heinous power of the Shadow – it feeds off misery and shame and there is plenty of that here.

On discovering an old radiola VIII in the church attic, Jake finds he can hear looped recordings in the static – cries of help from the ghosted orphans now trapped in limbo.