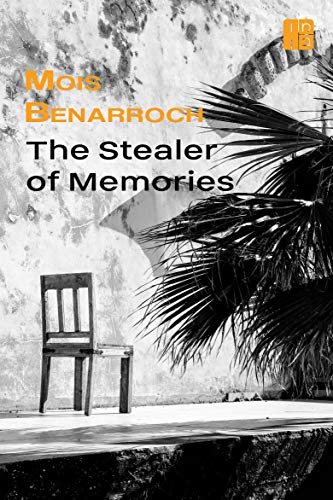 Book: The Stealer of Memories by Mois Benarroch

about this book: A novel about a person who captures in certain circumstances the memories of the others and then makes them his own, until he becomes the memory of the world and his own lifetime.

This is the book that initiated the cycle of 7 books called "Love and Exiles" ("Amor y exilios") which includes the novels: Muriel, The Cathedral, Raquel Says, The Expelled, The Stealer of Memories, available now in English translations, as well as Renee and El empapado (to be translated). This is a cycle about love and exile, love in exile, soulmates, immigration, isolation, strangeness, and the strive to live in a society where people are more and more atomized.

The novel travels in an imaginary geography of the author where cities like Tangier, Barcelona, Paris, Madrid, Jerusalem, are part of one country where the Sephardi Jews lived and flourished in the last five centuries.

It has happened to all of us, we're talking with our brother of a childhood memory and suddenly he says, but you didn't do that, I did. And that seems normal. But, what do we remember when we remember? Scientific studies show that in less than twenty-four hours we have already changed the memory of what has happened to us. Perhaps our memories are not always completely ours, only partially ours, partly they are what others who were in the same place have told us, and partly perhaps they are memories of others that with time are infiltrated in our brain. The narrator of "El Ladrón de Memorias" does not steal memories, but he feels like a thief, because he is drawn to pulling at some moments other people's most intimate memories, only to realize that he can no longer differentiate his memories from the others. "The Stealer of Memories" is an autobiography of the entire world.

"Rarely have I had the opportunity to read a book on Kindle with the characteristics of "The Stealer of Memories". Mois Benarroch has the strange particularity of talking about anything and has a way of making you unable to stop reading. I have compiled many fragments of his book because they seemed interesting, intuitive and I think I almost believe that in fact the author is a memory thief:

"…But there is one that doesn't go away. And it is that every text is autobiographical. Each character is the author. Nothing original in that. I know. But I'm not saying that every text is based on the life of the writer. Just the opposite. It is based on the not-life of the writer. The wife who appears in the text of a male writer is not the writer's wife, and vice versa, the homosexual will be the one who was not, the rich one is the rich one that the writer longs to be, if he is poor. The writer defines himself by what he cannot be. What he cannot be is not infinite. One cannot not-be just anybody. He can only be characters or people he is able to imagine…"