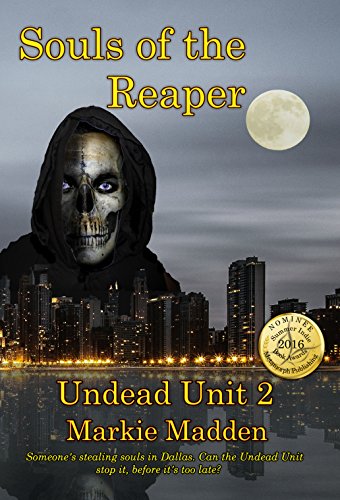 Book: Souls of the Reaper (The Undead Unit Book 2) by Markie Madden

about this book: Souls of the Reaper is the newest book in hot new crime/paranormal series The Undead Unit Series. Get to know Lieutenant Lacey Anderson and Detective Colton Scarber in book 1, Fang and Claw, and meet new team member Karan Moss in Souls of the Reaper. What's so hot about this series? Well, Lacey is a Vampire, Colton is a Werewolf, and Karan (AKA Kazz) is a Shifter. Human society is well aware of the Immortal population around them (or Undead), though governments around the world have imposed the Undead Oath, which each Immortal must take before becoming full citizens and being able to work among humans. The Undead Oath forbids them from harming human life, and compels them to follow all human laws.

In this world, the Dallas Police Department has put together an elite new squad dedicated to solving crimes involving Immortal victims or perpetrators. Fang and Claw deals with Lacey and Colton as they learn they're paired up, and the lessons they learn as the fragile partnership begins to take shape.

Souls of the Reaper

A rogue Reaper is on the loose in the city of Dallas. Su Xiong is a sociopath with no care for human life. He steals souls whose numbers are not yet up in order to become a more powerful Immortal. But instead of releasing the souls, as is the duty of a Reaper, Xiong keeps them all to himself.

While he's on the prowl to gain power, his soulless victims roam the streets without morals, without inhibitions, without any code of conduct or social mores. Crime has risen tenfold: petty crimes, road rage, prostitution, drinking, and gambling. But for each soul that he captures and keeps, his own mental stability begins to degrade, a fact that Xiong is dangerously blind to.

Can Lacey and Colton, along with Doctors Matthews and Dilorenzo, find him and stop him, before the insanity inside spoils the souls he holds within?