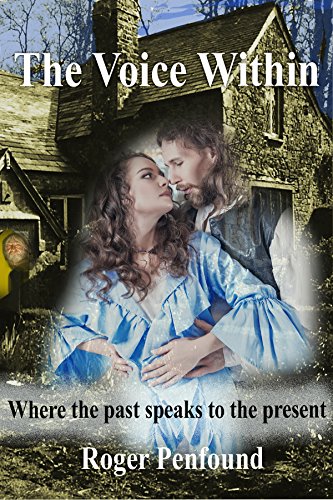 Book: The Voice Within by Roger Penfound

about this book: A journalist on a major London daily is set up by his bosses on charges of phone hacking and forced to resign. With his career in ruins and his personal life a mess, he retreats from his former life of debauchery and excess to his family's ancestral home on the rugged coast of South West England. Penhallam Manor was the scene of a mysterious triple murder during the English Civil war and Doug Penhallam's unemployed status gives him the opportunity to research the story for a book he is writing.

The current owner, Julia Masters, lives an isolated and alcoholic existence in the house. She agrees to take Doug in and show him the ancestral home. As a journalist raised on a diet of cynicism and mis-trust, he finds himself inexplicably drawn back to another time as the building releases the memories that are locked within its fabric.

On further visits, the relationship between Doug and Pamela develops, both being in need of human companionship. Doug discovers the dark secret that binds Pamela to the house and on his first overnight stay, the memories that assail him begin to take on a more pragmatic form with parallels to his current life.

Doug is estranged from his family but a call from his former wife alerts him to his son, Nick's, relationship with a Muslim girl. The girl's father has forbidden her from seeing Nick and demanded instead that she return to Pakistan to marry a local boy. The girl is threatening suicide rather than comply with her father's instructions.

Doug's attempts to intercede are met with derision by Nick who blames his father for his damaged upbringing but when Aleena is kidnapped by her radicalised brother and made subject to the authority of a sham Sharia court, father and son bury their differences in an attempt to save her from a terrible punishment.

As events unfold, the memories at Penhallam become more vivid and Doug finds himself drawn back into a tempestuous time in 1643 when neighbour fought neighbour in a bitter civil war that led to the murder of two lovers who found themselves driven apart by feuding families. Doug begins to realise that the memories that speak to him now are connected with his own son's contemporary troubles and that listening and learning from the past may hold the key to saving Aleena.

The notion that memory can be stored in items other than conventional recording tape or hard drives, has some scientific credibility. At MIT in Boston, memory has been decoded from objects as diverse as the leaves of a plant and a crisp packet. It seems reasonable therefore to ponder the impact of buildings retaining memory within their walls, particularly when the original events generated a state of heightened emotion. The question is, how do we replay these memories? Recording tape is easy – we have the technology available. In 'The Guest Who Stayed', Doug Penhallam returns to his ancestral home and it is his genetic link through his family line that provides the trigger for these memories to be released and replayed. In addition, the memories link to the current problems encountered by his son in a relationship with a Muslim girl, raising the question of whether memory can be inherited and passed down a family line, just as physical characteristics are inherited from one generation to the next.

Many of us have experienced a place we recognise but haven't visited before, or a face that is familiar but the person unknown. The Guest Who Stays prizes open the door on these issues and suggests that we live in a more complex realm that our current consumer driven society finds difficult to embrace.