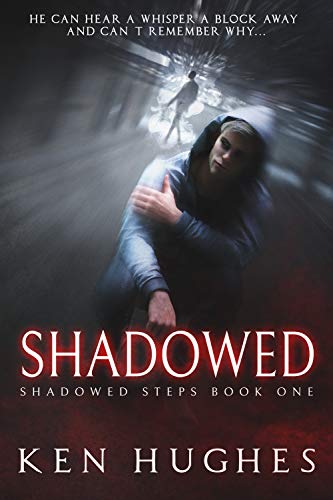 about this book: He can hear a whisper a block away, and can't remember why.

Shadowed is about a hero hanging on by his fingernails. Paul Schuman's preternatural senses have driven him away from his family and his old life, and forced him to live in hiding using what few tricks he can learn on the street. He searches for answers, or just a way to find a meaning in what he's become, in any way that won't let anyone suspect such a dangerous power exists in the world. Until the night even those assumptions are blown apart, when someone else acquires the same power--from stumbling into him. His sister-in-law.

My two favorite things I've heard about Shadowed are "Before I realized it, I had read the book through in one evening" and that Paul was a completely new and original kind of hero. I wanted to take away all the assumptions people make about adventures, with a hero who has unique "gifts" but still lives in flophouses and has to get an advance look at a building's locks before he's sure he can pick them. The two women he's drawn to are a reporter he's embarrassed with a tip gone wrong, and the one who needs his help to control her new powers but is more interested in him learning who has been breaking into his brother's home.

This is the kind of book where several people get shot, but the hero throws exactly one punch in the story, and it may not be at the one who most deserves it. With a city full of suspects, his own control of his senses breaking down, and every move he makes risking more of the attention he fears...

For Paul, looking for answers is never ever easy. But it's when he starts finding them that the trouble starts.