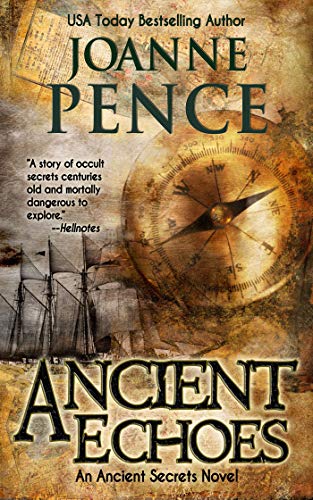 about this book: The central part of Idaho is a vast, roadless area of mountains that soar to ear-popping heights, deep canyons, glaciers, and mountain lakes. No one has ever lived there, not even Native Americans of the Pacific Northwest. ANCIENT ECHOES presents a reason no one inhabits the area…a reason that has to do with unnatural dangers and death. Over two hundred years ago, a secret expedition was sent by President Thomas Jefferson to follow Lewis and Clark as they crossed the continent. When they reached what is now Idaho, the people of the secret expedition disappeared. Now, a group of anthropology students and their professor go to the same area and they disappear.

An archeologist working in Mongolia opens a two-thousand year old Chinese tomb and finds a strange being created through knowledge of alchemy. A woman travels to Jerusalem to learn more about the death of her husband who was a CIA agent…and learns of his interest in alchemy. Both discover that the answers they seek lie in the peculiar disappearances in Idaho. There, they not only encounter each other, but a CIA consultant who deals with paranormal phenomena, and the local sheriff who is in charge of trying to find the students and has no patience for the strangers who have just shown up.

Together they uncover ancient secrets and, with it, a plan that could change life as we know it.

I was inspired to write a book set in Idaho ever since moving here over ten years ago and being intrigued by the emptiness and beauty of this state. Working on the book gave me an opportunity to do a lot of research—to learn, for example, that when some railroad engineers explored the area along the Salmon River in order to lay railroad tracks, it took them months and they declared it to be the most dangerous and difficult terrain in the country. No train goes through the area to this day.

Then, a weird thing happened to me. I was in a dusty old bookstore in a small town near Boise, and a very thin, but oversized (about 10"x13") book practically leaped off the shelf at me. I have no idea what made me open it, but it was a reprint of a book from 1624 reputed to be a true translation of work by the alchemist, Nicolas Flamel (whose name may be familiar to Harry Potter fans). The book was written in a weird Germanic looking font, and filled with strange pictures. It told the story of Flamel finding "The Book of Abraham the Jew," and after several decades learning to understand it sufficiently that he was able to create gold. Needless to say, I bought the book, and as I learned about alchemy, I realized I could interweave Idaho history and alchemy, and turn the story into a thriller.

I hope the book will appeal to fans of the paranormal thrillers of Douglas Preston and Lincoln Childs. Also, anyone who enjoyed THE HISTORIAN by Elizabeth Kostova, will see similarities in the old journals from the Secret Expedition as a driving force for the modern day adventurers as they try to find the missing university students.

I had to do a lot of research for this book. In fact, I set up a website, www.ancientechoes.info, simply to discuss the numerous threads of research I encountered. The most difficult part of writing the book was to cut out an enormous number of interesting factoids that slowed down and got in the way of telling a darn good page-turner of a story. Hopefully, readers who want to learn more will go to the www.ancientechoes.info site.