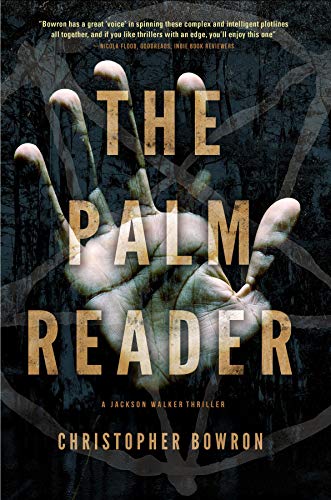 about this book: "The Palm Reader is action-packed and exciting, with twists and turns, fantastic characters and a truly spellbinding plot—the best book in its genre I have ever read. Highly Recommended!" – TheColumbiaReview.com

THE PALM READER is a story with a dark premise and cast of characters neither you, nor I, should ever want to meet in a lifetime.

Jackson Walker, to his near demise, gets caught up with a group of Satanists five years ago down in the Everglades. After a showdown with a couple of psychopaths, the McFadden brothers, he manages to take down the local sect – The Church of Set.

Jackson is accidentally tossed into a police detention van were he meets eye-to-eye with one of the few survivors, the Grand Master of the U.S. division of The Church of Satan, Mason Matye. Jackson staves off an attempt by Parisian to kill him with a concealed dagger, getting the best of the French Satanist in the process. Mason makes a pledge in the name of the Dark Lord to kill Jackson for his transgressions against him and the Church of Satan. Jackson, forever apathetic, doesn't take the threat seriously, knowing that Matye was sentenced to life. Unfortunately for Jackson and his Seminole family members, the evil man has friends in low places.

The Satanists in this story are evil and cunning, hell bent on human sacrifice and sexual arousal to attract and please their Lord – Satan. Hero, Jackson Walker, attempts to stave off an ever menacing threat in this fast paced Southern thriller; a stand-alone sequel to the author's first novel – Devil in the Grass.