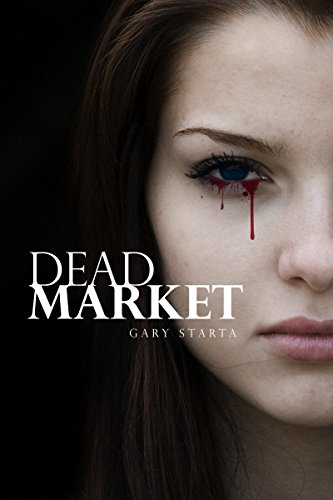 about this book: What ailment doesn't the pharmaceutical industry try to sell a pill for?

What about a new market ... a dead market?

When Big Pharma unleashes a virus, a cop, drug dealer, and single mom get caught in its wake. Now reanimated and hungry for flesh, the cop and mom walk a tight rope between their former humanity and the living dead.

For them, a little blue pill will keep them non-ravenous and less pale than the average dead person. The drug dealer has a supply thanks to a blackmailing ex-ATF agent who works for a nameless and faceless scientist.

Vice cop Derek Burnham can't live with his new zombie self. He wants to find the manufacturer of his fate. Lorelei, a mother missing her child, is less concerned with her morals, and more concerned with paying back the drug dealer who 'frankensteined' her to be his apparent bride. Filled with icy rage, she has nothing but contempt for the drug king named Amado James. For her, sinking teeth into flesh to satiate her desires is just fine as long as it brings her closer to revenge.

Enter failed comedian David Finch, best friend of Burnham. Still quite human, and still quite frail, Finch is overjoyed to be reunited with his friend who was reported dead by the media. Actually, Burnham was bit and reanimated by an earlier test subject and former cop named Comiskey.

Burnham, Lorelei and tag along Finch come to find the creator of the virus is literally a mad scientist. Will they opt for ice cold revenge or will they barter for a dwindling pill supply that keeps Burnham and Lorelei human?

And how will Finch fit into this paranormal equation because the man is clearly head over heels in love with Lorelei, the hottest walking dead woman he's ever laid eyes on ...

Finch wondered if Burnham caught his inflection. If this was the old Burnham, the cop Burnham, Finch was sure he had gotten his message across. Implying that he was prepared to run, Finch waited for a sign from Burnham to assure him everything would be okay.

"Finch, you'll scare the morning commuters half to death if you plan to run out of here dressed in skivvies. As I said, things are weird. But we're all going to have to adapt."

Finch exhaled sure his old friend was underneath the baggy shirt and beard.

Lorelei nodded. "I guess now is my cue to shower. You've got some catching up to do."

"Sure, love," Finch called after her. "The robe's hanging on the door. Fresh towels are in the closet. In the morning, I'll shop for some clothing."

"I appreciate that," Burnham answered. "We'll write down our sizes for you. But right now--"

Finch interrupted. "You'll tell me just what the hell's is in that backpack?"

Burnham pursed his lips and opened the tote's zipper once sure Lorelei was in the shower.

But when Finch peered inside to find bags and bags of blue capsules, he realized an answer had produced only another question.

"What are you doing, Burnsy. You freakin' dealing. Or wait a minute…is she a NARC, DEA? You two running a sting?" Finch slapped his hands together and whistled.

"No. Calm down, Finch. We're not selling…These pills keep me, me."

"Oh, shit. Then you're using. You're two junkies."

"No, Finch. Remember I said we were changed. We woke up with a craving. These pills help us."

Burnham recounted his story, how he had been bitten by Comiskey and subsequently put him down with bullets. Awakening in the ambulance, somehow reborn, and how his panicked reaction had instigated the accident and killed the EMT's. The bizarre conversation with the religious lady, who strangely mimicked Finch's reaction, and her attempt to kill him before she inadvertently killed herself. "The religious lady judged me just like you are, Finch. Except she had every reason to, but you, you know me, Finch. I'm not a junkie. I'm a vice cop, sworn to help them by taking down their dealers. And no matters what's been done to me that will not change."

"I see, mate. But what about the lovely bird there? She flies on the straight and narrow--or you would like to believe she does." Finch cast suspicious eyes on Burnham.

"I have no reason to lie to myself. I'm not with her."

"Mmm hmm. The way you said that seems to imply that you might like to be with her. That's just as bad. So tell me; are you trusting her because of her looks or because of her character?"

Burnham took a seat at a bar stool in the kitchen. "I see I've got to give you the full tour."

A half hour passed as Lorelei showered; apparently in no rush to leave the soothing warm cascade of heated water she had been sorely missing. Burnham utilized the time to recount her story of how the crime lord Amado James turned her more out of sick curiosity than purpose. Her eventual escape from the man she only lived to see die. Why she had cut off relations with her daughter because of what she had become. How her supernaturally enhanced eyesight allowed her to keep tabs on his patrolling. And why she had turned Comiskey in the first place, so their mutual friend could ultimately bring down the sick bastard who had infected them for some unknown purpose.

Finch digested the information, summing up the sick bastard's purpose in one line.

"He's out to create super people."

"But we are carnally driven. I don't think cannibals qualify as super people, Finch."

"That must be a glitch." Finch paused to sip some juice. Then he waggled a finger. "I'm telling you. You two are most definitely part of some agenda to create a super race. Look, there are always some sinister side effects to go along with these diabolical plans."

Burnham rested his head in his hands. "Wait a minute. Are you quoting history or film?"

"If this Lorelei ever asks about my predilection to watch science fiction, you vehemently deny it. Got it? Can't have her thinking I'm one of those geeks."

"Don't worry, Finch. You're too good looking to be categorized as a geek."

"Got that right, mate." Finch arched his shoulders and exhaled. "I'd be a golden god if I had golden hair."

"Maybe she likes dark and handsome."

"Don't be coy, so you have designs on Lorelei. I told you, I'm not with her. But I would tread very lightly. She has a tough exterior."

Finch combed a hand through his hair. "Wonder if she digs the bad boy look, the ruffian without a comb. Come now, what did you tell her about me? You must have said something."

"I said you were a depressed bastard comedian who made us feel better about ourselves. All the officers would go see your act, not for just entertainment purposes, but for psychotherapeutic healing. Because at the end of the night, we all reasoned we could stick out another day no matter how bad; we knew we could come and see your act again, and we would somehow be transported away from the world's shit for a few more hours. But all seriousness aside Finch, be careful what you wish for. In other words, if you think Lorelei is a potential mate, don't let her beastly side daunt you."

"Sounds like you're daring me to make a fool of myself. Never mind then. What's really important is that I wished you were back, mate. And here you are." He paused to hold up his glass to Burnham. "I think a prayer has been answered. And because it has, I promise to lose all my cynicism."

"What you? You're cynical by nature."

"Wait. I heard the water stop. We better save this discussion."

Lorelei popped in a minute later, toweling her hair. The blue robe about her had already transformed her new and exotic nature; at least in Finch's eyes.

"She still looks damn human to me," he whispered in Burnham's ear. "But if she's a zombie…she can still have her way with me."

Burnham stifled a laugh. Lorelei was clearly on to them.

"Sharing secrets, are we? You know men accuse women of doing that all the time."

"No, we're actually planning, love. Want to join us?"

A pharmaceutical giant has run out of ideas to expand market shares. Men, women, the young and the old can no longer be depended upon to sustain a multibillion dollar company. But a manmade disease which alters the genetic makeup of humanity might be just what the analyst ordered. The disease causes its victims to die and reanimate, when they awaken they possess supernatural abilities and a ravenous hunger for human flesh. But a little blue pill will curb their nasty vices in response to the incurable – but highly treatable - prion-based disease. Or so greedy executives think, because unaccounted reanimates have been accidentally created and these living dead are in no mood to become a corporation's new DEAD MARKET.


RELATIONSHIPS CAN BE STRANGE ...

For failed comedian David Finch, life is looking pretty glum. To make matters worse, his best friend has been killed in the line of duty. Or, so he thinks. When Derek Burnham reanimates he comes back with some special abilities. Now Finch envies his returned to life bud and his reanimate companion, a zombie he can't take his eyes off...