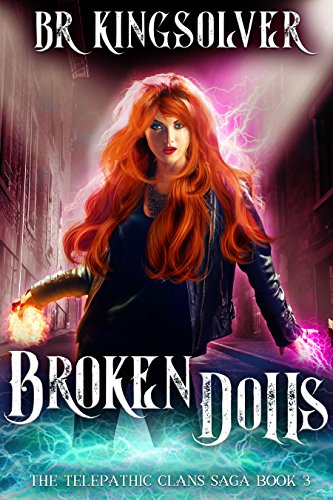 about this book: Broken Dolls is about a female private investigator, RB Kendrick, who is a powerful telepath living in London. The Telepathic Clans are the descendants of the people who engendered the myths about the Fae, or fairy folk, and the Druids. Living hidden amongst normal humans, they have their own society that spans the globe.

RB is contacted by a Clan Chief to find a young Druid, also known as a succubus, who is missing. Kendrick discovers a network of human trafficking that is kidnapping, controlling, and selling young telepathic women as sex slaves.

Her quest to find the missing girl takes her to Ireland, England, Paris and Munich. Along the way, she becomes a target of the traffickers herself.

I usually imagine characters and then look for a story for them. I've been aware of human trafficking for a long time. It's a huge business and the major markets are the U.S. and Europe. Rather than look for villains that are demons seeking world domination or destruction, I tend to use the evil that really exists in the world. The bad guys in my books are other telepaths.

It took about three months to write the book, and then another three months for editing and revisions. I had the second draft of the manuscript complete when I took a vacation to Paris. A large section of the book is set in Paris, and I used that trip to enhance some of the details of that section.

It seems that most stories of contemporary paranormal fantasy focus on vampires, werewolves, and demons. I wanted to create a world that was unique and not just a copy of what other people were writing. I think I've accomplished that.