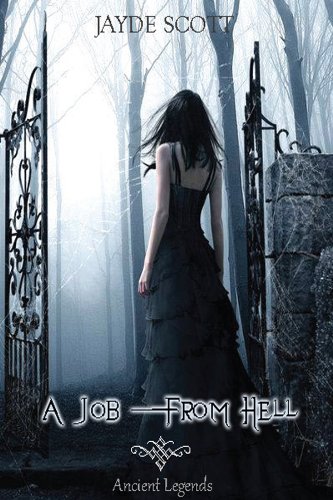 about this book: In a world of love bonds, rituals, dark magic, ancient enemies and immortals, nothing is as it seems and no one can be trusted.

Amber enters the paranormal world by chance when she commences her summer job in Scotland. She finds something in the woods she thinks could make her family rich beyond their wildest dreams. But instead of finding riches, Amber unknowingly enters a paranormal race--and promptly wins the first prize--a prize for which many would kill. Soon she discovers her new boss, Aidan, isn't who he claims to be. Sexy Aidan craves her love because he shares an ancient bond with her. But he also craves her blood.

With every immortal creature wanting Amber's Gift, who can she trust with her life?

Character interview with a necromancer:

Surfing the net recently, I came across this really neat idea of character interviews. So today I'm going to introduce you to Amber, the lead female character in A Job From Hell.

Q. Amber, you recently turned eighteen and won the gift of talking to the dead in a paranormal race. So, I guess you're a necromancer now. Is that something you've always wanted to be?

A. Oh, gosh, no. The dead, both the dead-as-a-nail-coffin and the walking-among-us dead, kinda give me the creeps so I'd rather not deal with them day in, day out. I remember the first time I saw a ghost. I was sitting in a pub in Inverness, Scotland, facing this lady in black at the bar. Only, her head was tilted to the side in an unnatural angle. I seriously thought she was an actress. And then I started to see more and more ghosts, walking down the street, following me in the woods. Imagine waking up in the middle of the night with a cold sensation creeping up your arms or seeing your boyfriend's ex spread all over the bed, dead as a stone with a gashing wound on her neck. That one still gives me nightmares.

Q. But even after finding out you were a necromancer living in a house full of vampires, you still didn't leave Scotland.

A. Trust me, I tried. I wanted to run but I didn't get very far. The moment I left Aidan's property, I was almost kidnapped by a bunch of creepy black-eyed warriors called Shadows who wanted my ability. I managed to escape and stayed with Aidan, thinking I was better off with a vampire than with the Shadows' child queen aka the Exorcist kid. How could I have known my new crush, Aidan, had his own motives to keep me close to him? It took me a while to realize he wasn't my hero, and I was a trusting pawn. I was naïve and in love, and stayed for hope.

Q. Your friend, Lucifer's daughter, Cass, ends up playing a big role in your future, but she reminds me a bit of Carrie in Sex and the City. How on earth did you two become friends, and is she really such a 'scatter-brain'?

A. I think she is. Starting with her way of dressing in the most garish outfits ever, to her strange reasoning or inability to focus on a thought for longer than a few seconds, there's always something about Cass that isn't 'normal', but her nerdiness adds to her charm. Cass is quite complex, caring and fiercely protective of her friends, which I admire about her. But she can also be quite shallow and manipulative at times, and I don't know if she would really swap her life as a fallen angel for being normal. We became friends because she was brutally honest with me when she revealed Aidan's identity. I like people like her.

Q. Early on in your story, I could sense a certain frailty in you. Was it the strange circumstances and occurrences in Scotland or meeting Aidan that changed your life?

A. A bit of both, actually. Moving away from your friends and family into a deserted mansion in the middle of nowhere isn't easy. And then falling for the hot employer who's supposed to be off limits when strange things start to happen all around you, let's just say, I wanted to stay away from him, but he wouldn't let me. Suddenly finding myself trapped in Aidan's paranormal world helped me discover my true self and gain confidence along the way.

Q. You're not just a necromancer; you're something else that you said you'd rather not reveal. Where do you see yourself in the future?

A. For a long time, I wanted my old life back. But I've realized I can't have it, so I'm making the best of my new circumstances. I want to help others in my position, which is why I've decided to put my new ability to good use and turn it into a business venture.

Q. And lastly, how would you summarize your story?

A. It's the story of a young woman guided by fate, who would do anything to save the man she loves. A story of love and betrayal, of hidden motives and an ancient war between two races in which she will always be a pawn.

Fun interview with the writer:

• Have you ever gotten an idea for a book or part of one of your novels from something or somewhere unexpected?
All the time. I tend to get great ideas while watching movies, in particular horror and romantic comedies. Most of the time, these ideas have nothing to do with the movie though, so maybe just switching off my brain kick-starts my imagination.

• Did you always know you would write a novel? Why did you finally decide to write one and when?
I've been writing ever since I remember. First it was short stories and poems, then I moved on to song lyrics. By the age of eighteen, I had read most classics like Kafka and was a huge Tolkien and Anne Rice fan. After reading the Vampire Chronicles I knew I had to write a book, and a month later I finished the first draft. Needless to say it was bad, but it shaped my future way in that I knew I had found my passion in life and would be a writer one day, no matter what.

• What are five things that are must haves when you are writing?
Coffee, my MacBook, YouTube, a cat to cuddle, a tidy room

• Is there one book that has had an impact on not only your writing, but on you personally?
Definitely The Hobbit. I adore that book and must've read it a hundred times.

• What is the hardest emotion for you to convey?
Sadness – because I tend to see the bright side of life.

• Tell us something most people don't know about you!
I wanted to be a pilot but had to give up my career aspirations because I have panic attacks whenever I board a plane.

• Which came first for you--the characters, the idea for the setting, or the plot?
Always the plot or plot elements. I usually know what's going to happen to my characters long before I've decided on characters and a setting.

Video: A Job From Hell by Jayde Scott