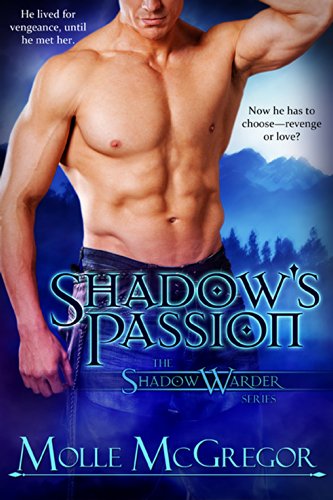 The Shadow Warder Series offers a fresh take on paranormal romance. Read the prequel novella, Shadow's Passion for an introduction into this new world of demons and those who were created to protect humanity. The Shadow and Warders were created by the ancients to hunt the Vorati demons and safeguard humanity. But devastating a betrayal forces the two groups apart for almost fifteen hundred years, leaving them weaker. After so many centuries, the demon threat has grown. The Shadow and the Warders will have to decide if they can set aside their differences and join forces once more.

Shadow's Passion is the story of Gabe, a Warder assassin and Celeste, an exiled Shadow healer.

Exiled by her people after an accidental death, Celeste's power is so unstable the elegant Shadow healer is considered a deadly menace. Fifty years of isolation have left her a little lonely. And more than a little bored. When a nearby family falls victim to demon infection, she decides to go hunting. But without backup, it won't be long before the demons are hunting her.

A dangerous assassin, Gabe has better things to do than save a Shadow from her own reckless behavior. Like find the demon who killed his brother. Sure, the Shadow is gorgeous, alluring, and she needs his help. But he can't afford to get distracted. Everything changes the second he spies his brother's killer among the demons after Celeste. Now, nothing will tear him from her side.

Gabe is dangerous and secretive. He's also a skilled fighter and sexy as hell. Celeste knows better than to team up with a Warder, but she's not sure she cares. It's been a long dry spell since her exile. Neither of them expects their fling to turn into something more. But when Gabe's past catches up with him, he learns that his brother's murder was just the beginning. A new evil is rising, and its sights are set on Celeste. Now Gabe has to make a choice: revenge or love?