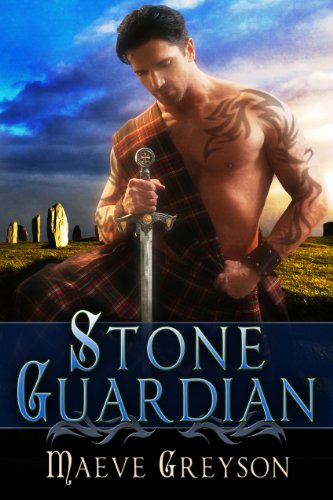 about this book: Science + Data = Fact. At least that's what pediatrician Emma Maxwell believes. Career-driven and guardian of her sister since their parents' death, Emma doesn't waste time on anything as unpredictable as dating. While starting a clinic on the Isle of Lewis, Emma chalks up the eerie pull of the Callanish Stones to jet lag or a shift in altitude. But when she finds herself nose to nose with an ancient Scot babbling about magic, scientific explanations get pretty scarce. It has to be one of two things: Either Torin's escaped from a mental institute or the stress of leaving college-age sister alone in the states has finally pushed Emma over the edge.

As Stone Guardian chieftain, Torin Grey serves the gods. When he attempts to change his fate, he discovers how fast disobedience is rewarded. His punishment? Stasis in a cursed sleep while all he cherished turns to dust. Torin can't imagine a worse sentence –until he awakens to a world he no longer knows.

When the gods realize the beast they unleashed should never have been unshackled, they throw together modern-day Emma and ancient Torin to set the world aright. Now the mismatched pair must fully discover their powers, meld them and send the demon back to his hell. But what Emma and Torin don't realize is there's a troubling side-effect to melding magic. Hearts tend to get tangled too even when the two souls aren't comfortable in each other's worlds.