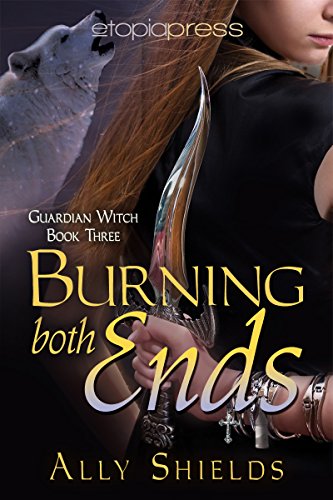 about this book: Burning Both Ends is the third book in the urban fantasy Guardian Witch series. While there is a strong romantic thread throughout these books, they are not standard paranormal romance and any sex scenes are behind closed doors. The storyline is actually more crime fiction, built around investigative work and the solving of one or more mysteries in each book. Although I believe they can standalone, I strongly recommend that the series be read in order because of a continuing story arc.

The main character in the series is Ari Calin, a fire witch and the Otherworld cop for the Olde Town district of Riverdale, a city set high on the cliffs overlooking the Mississippi River. During the first two books, she has become deeply involved in the problems of the vampire community, especially repelling attacks from a hostile vampire court from Toronto, Canada, and she has developed a romantic relationship with Andreas, a charming 200-year-old vampire.

In Burning Both Ends, Andreas and Ari carry a warning to the foreign court: it's time to stop the warlike actions or suffer the consequences. Having come to Toronto under the vampire equivalent of a white flag, they are surprised to suddenly find themselves in a chaotic situation, surrounded by enemies. While Ari and Andreas are trying to figure out how to stop the uprising, Ari's magic council from Riverdale orders her home to solve a kidnapping. Steffan, the local werewolf leader and a good friend, was abducted during a dispute among the wolf clans. His fate is unknown.

Andreas can't abandon the Canadian vampires, and Ari can't abandon him, but she can't ignore her job or the danger to her werewolf friend. Confronted by conflicting loyalties, she really has no good choice. She has to somehow save them both.

At least four more books are anticipated in the series. Book four, Blood and Fire, is scheduled for release in the fall of 2013.