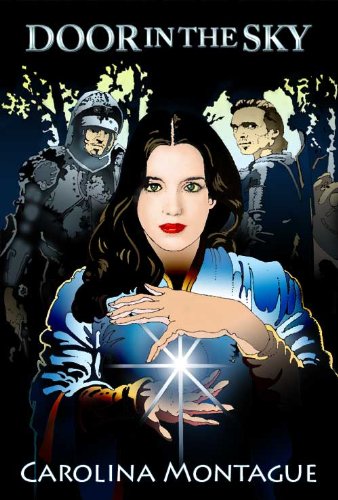 Book: Door in the Sky (Mother of All) by Carolina Montague

about this book: Door in the Sky (Mother of All) is the first book in a four book series that spans the thirteenth century to the present day.

Mariana de Reuilles is the daughter of a Basque witch. She comes into her full powers at a time when an Inquisition against the Cathar heretics is completing the destruction of the Languedoc, not far from her home in Navarre. As Mariana learns her mother's ways, she is drawn into the fate of a sacred, magical relic that was smuggled out of a fortress destroyed by the Inquisition. The man who captured her heart, Richard, is a Breton knight who was her father's squire. Richard understands the old ways, the circle fires and standing stones. Yet though he loves her, Richard is promised to another. Henri, a knight of the Inquisition is sent to destroy her, but instead seeks to win her heart. When the full force of the Inquisition comes for her, she must choose.

This book has a long history. It first came from a Ouija board reading with a friend in 1970. The messages we got were a hand rocking an empty cradle, a chateau buried in snow, and a love so deep and wide that it spanned several lifetimes. The title came from a dream where I was flying and looked up at the sky to see a door just hanging there. The door was made of vines and leaves and through it I could see the universe, depth upon depth of colors and lights that I could not even name. This was before Hubble pictures but when I saw them, they looked like what I saw in the dream.

I started writing it in 1978 but a Ph.D. program and life pushed it aside. In 1992, I was purging old files and discovered the five typewritten chapters I had completed. I looked up at my Apple computer and thought "Cool! I have a word processor now. This would be fun." I researched it from books in the basement of UC Berkeley's DOE library, using old old books written in French and completed writing it in 1994.

Then I had no idea what to do with it. I queried agents and got a positive reply from an agent who asked for the full. She still liked it but wanted me to cut fifty thousand words. I had no idea how to do that so I went to a novel writing workshop with Paul Cohen in San Francisco and rewrote the whole thing from 1994 to 1996. I was advised not to cut fifty thousand words, just to send it out.

Along the way, I met Lynn Coddington, who advised me to join Romance Writers of America because the book had a strong love story. I joined RWA and my local chapter, SFA-RWA and sold the book in 1999 to an E-Publisher.

I had about a quarter of the second book in the series done by again, life happened and I set it aside, but sold a short story in 2002 to a "Big Six" publisher's anthology and sold two more novels to E-Publishers in 2009.

When I got the rights back for Door in the Sky in 2009, I rewrote it yet again to align it with the series and, guided by other authors in SFA-RWA, put it out myself through Amazon KDP.

The original cover was a Basque symbol in gold on a blue background. This was my fault, not the publisher's. I thought it looked cool. Go figure. After it came our in paper and I did book signings, people told me they had no idea what the book was about from the cover.

My webmaster, Ramon Alvarez, is an artist so I gave him a sketch with the heroine, surrounded by the heroes and holding the Light between her hands, which is from a scene in the book. He took images I had of the heroes and the heroine, along with my sketch and created the cover.

This version of Door in the Sky has the first three chapters of the next book in the series.