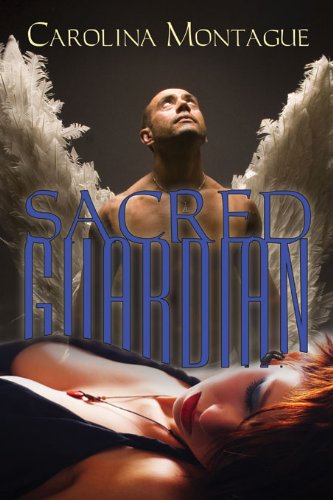 about this book: Sacred Guardian is the story of Joe Littlehawk, a spirit who was given the task of assisting the living after he was killed in Vietnam. An angel gave Joe three rules when he took this job: Never let them see you, never interfere, and most of all, never, ever touch them. He'd followed all these rules faithfully, until he is given the job of watching over Alena Morgan.

Alena is the daughter of hippie parents who went to Woodstock and basically never left. Her parents died from drug abuse, and Alena was rescued from a similar fate by a social worker who became her close friend. Alena married and had a son, but her husband died in an accident that severely injured Alena's neck. Alone and afraid, with no money, a young child to raise and constant migraines from the neck injury, Alena suffers an accidental overdose of migraine medication.

What is Joe to do? He can't let her die. Alena has no use for anything remotely spiritual, yet she can't explain how she survived a lethal dose and can't write off the warm voice that guides her. When Joe enters her dreams, where they can see each other, can touch each other, they have no idea of the deadly force they have unleashed.

I wrote Sacred Guardian to make sense of an experience that happened to me in 1996. Life had hit me full in the face and I was struggling to survive. I asked for help and received a quirky, smart-ass angel who really did help me but I was alarmed that I seemed to be experiencing audio hallucinations! A friend told me it was probably my writer's voice so I tested this assumption by trying to make the experience into a novel. I wrote my first book, which was really long, in two years. This book took more than ten years because it kept morphing as life, and the angels who stayed with me, changed. Finally, I chose one of the angels who helped me and pressed down hard on the story to shape it into a novel.

Though the book is fiction, two scenes in it actually happened to me: when Joe helps Alena find his death records and when he helps her get her son to the hospital when her son can't breathe. These are written pretty much as they happened.