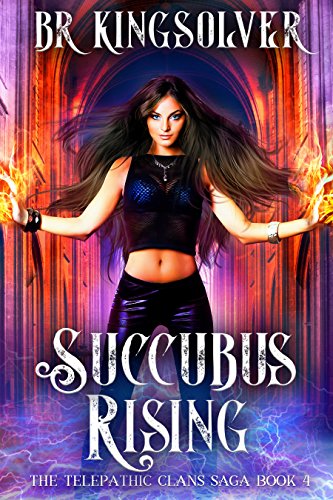 about this book: The third book in the series, Succubus Rising, was released Feb. 14, 2013.

Rebecca Healy is a true wilder, growing up with no contact or knowledge of other telepaths. Discovered by a Clan member on the streets of San Francisco, she felt like she'd hit the jackpot. Finally, she knew what she was, or at least she thought she did.

When Brenna O'Donnell, long-lost heir of the O'Donnell Clan, and the strongest telepath in history, is returned to her family, she and Rebecca form a tight bond. Brenna has it all, looks, money, power, and men falling all over her.

Rebecca isn't jealous, but it would be nice to find someone who would really love her and stick around in the morning. She's intrigued by a handsome South American general, but of course, he has his sights set on Brenna. Carlos de Vargas wants more than love. His Clan has its back to the wall, and they hope for an alliance with O'Donnell. An alliance that would lead to war.

The story began in The Succubus Gift and continued in Succubus Unleashed. In Succubus Rising, questions are answered and new mysteries are revealed.