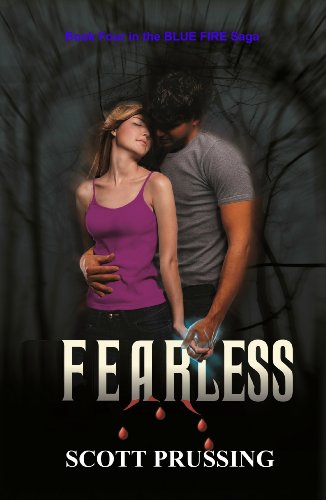 about this book: Fearless is Book Four in the Blue Fire Saga, a paranormal romance series beloved by readers and reviewers alike.

Fearless continues the adventures of Leesa, Cali, Rave, Dominic and Stefan, and introduces a new character, Jenna the witch. The question Leesa must figure out is whether Jenna is a good witch or a bad witch. It would sure be nice if she became an ally, because the vampires are growing restless and two more black wizards have appeared. And that doesn't even count the horde of zombies who attacked a mall.

Making matters worse, a mysterious spell has fallen over the Middletown, Connecticut area, weakening the powers of every magical being in the vicinity. With her nascent magic weakened, Leesa can barely practice her spells. Worse, the volkaanes have left the area because of the spell, which means her boyfriend Rave is now several hundred miles away. What's a girl to do ?

Fearless is filled with the same romance, passion, suspense and warm humor that made readers fall in love with the first three books in the Blue Fire Saga.