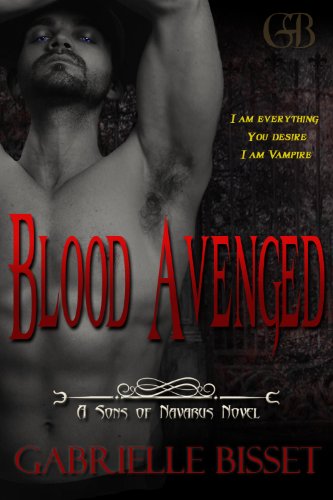 about this book: While many may say the heyday of paranormal romance is over, especially for vampires, I disagree. What readers want is a fresh story, no matter what kind of characters are involved. The Sons of Navarus series that begins with Blood Avenged is exactly that fresh story paranormal romance fans are looking for. The difference begins with the conflict. It isn't the same old vampires vs humans, but in this series it's vampires vs vampires, an internal power struggle between the Archons, the law and order vampires who seek to control the vampire world through harsh rule and repression, and the Sons of Navarus, eight vampire warriors chosen to defend their world.

Foretold in the Prophecy of Idolas, the Archon takeover has begun, and now the Sons of Navarus must protect their kind from their vicious rule. Vasilije, one of the Sons and a powerful vampire sire, cares little for ancient prophecies and vampires too interested in subjugating the world to know there is so much more to being a vampire. For him, this life is one of decadence and luxury. An unrepentant hedonist, he wants nothing more than to find enjoyment, wherever it may be.

His world is turned upside down when one of his vampires is staked in New Orleans, and with as much passion for revenge as he has for pleasure, he travels there to find the killer and make him pay. But steamy New Orleans is far different than London, and there he meets a woman who thrills him unlike any other for centuries. Sasa has her secrets, though, and as they search for the killer, these two souls, more different than night and day, find a passion neither thought existed in this world.

But the Archons are never far away, and they've got someone from Vasilije's past working to eliminate him as she did his vampire. Tatiana holds a grudge, and she intends on seeing Vasilije dead, no matter who she has to kill on the way.

Blood Avenged is the first book in the Sons of Navarus series and eases the reader into the vampire world of the Sons. It's an epic world filled with love, passion, intrigue, suspense, and even the Greek gods figure into the battle that's coming between the Archons and the Sons of Navarus, so I didn't want to throw all that at readers immediately. What they will see is that Vasilije is a powerful Alpha male, and while Sasa may seem to be weaker, readers will see their story, along with the stories of all the other heroes and heroines in the series, grow through the upcoming books.

For me, the Sons of Navarus series gives me an opportunity to show readers that paranormal romance is more than just vampires vs humans. This series mixes vampires, mythology, history, and romance to make that fresh read that the genre needs. With each new book, readers will go deeper and deeper into this world and toward the final battle that will determine what kind of world all vampires will live in.

A word of caution: Blood Avenged only begins the Sons series. A traditional series, the Sons of Navarus story won't be wrapped up until the last book. However, each book does focus on one Son and his heroine while continuing the non-romantic storyline.

Readers have often told me they love Blood Avenged (Sons of Navarus #1), mainly because they knew the story would continue in succeeding books. Researched on site in New Orleans in the fall of 2011, it's one of my favorite books I've written. The second and third books (Blood Betrayed and Blood Spirit) are already available to readers, and I look forward to writing the Sons series for a long time.

Absolutely amazing series. This is the first book of 8 in a continuing series. I highly recommend this series to everyone. This kept my interest from beginning to end. Hot Alpha Vamps that are loving and protective of their mates while fighting off the ones that threaten all of the "Sons" existence. The story will leave you breathless and panting for more. Cannot wait for the next in this series! [by Gayle]