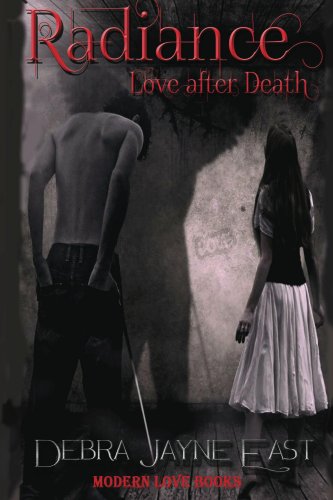 about this book: My book, Radiance: Love after Death was inspired by two things: a heart-shaped stone and a blind man. Depressed from the break up of my eighteen-year marriage, one day at the end of my rope, something told me to reach down into the grass although nothing was visible. I found a crooked heart shaped rock in the grass. I heard a voice inside my mind speak loud and clear. "Even though your heart is broken, it's still a heart and you can still love." It saved my life.

Later, after finding that stone I met a blind man who changed the way I view this world. I was amazed at how he didn't really seem blind at all. He mowed his yard, took walks, built things and could do almost everything a sighted person could do. I never told him about the stone, he told me. He described it almost perfectly down to the size and color. I feel like he had true psychic abilities. Somehow, he connected with the heart-stone, so I felt compelled to write a paranormal love story inspired by those events. My heroine is not typical by any means.
Forty-three year old Marena Jacobs had said goodbye to her happy life, when her childhood sweetheart, Ben, had left her for another woman. Now, driving home from work, a terrible car accident had nearly taken her life.

Waking up months later in the hospital, she wondered how she even survived at all? The newspaper and town folks had called her a "miracle" woman. During a session of hypnosis, Marena discovers it was much more than she realized.

When David Martin finally shows up, parts of her past are beginning to unravel. Strangely enough, she finds herself drawn to this soft-spoken mysterious stranger. David is blind, but that's not the issue. He's also taken a vow of chasity. How do you love a man that was never supposed to fall in love at all?