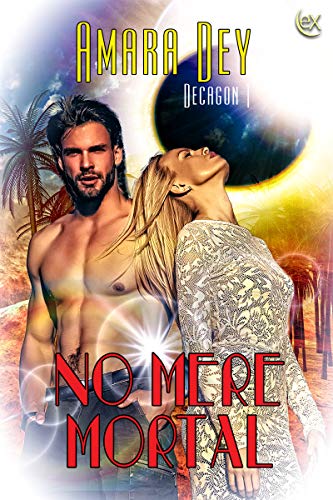 about this book: No Mere Mortal is a steamy paranormal romance set partly in London, UK and the fictional world of Decagon. I love the mortal/immortal combination, and this is the first in a series of three books.

My inspiration for the Decagon series initially came from my love of reading sexy paranormal novels. I wanted to write my own version of sensuous other-worldly desires, but I also wanted to bring a unique mythical element to my stories. For this I chose the Latino Gods, the Orishas. I made my characters the same species as them, and the Orishas themselves add a delicious flair of the exotic as brothers-in-arms to my heroes.

One of my favourite parts to write was the first hot scene between the hero and heroine. A tryst with a gorgeous deity is going to be a scorcher, and I smiled an awful lot when I wrote it.

So, why should you read No Mere Mortal? Well it's sexy, and if you like that in a novel this one's for you. It's also packed with villains, monsters, and exciting battles. But most importantly it's empowering, as the heroine realises her true potential, and accepts the responsibilities that go with that.