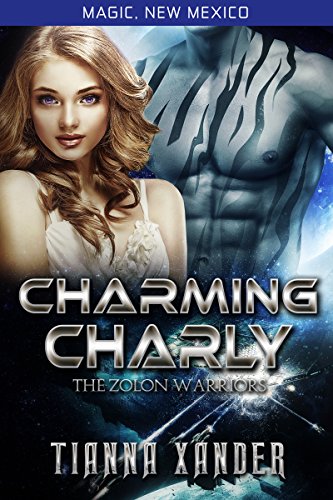 about this book: Charming Charly is book 3 of the Zolon Warriors series. Like the first two books in the series, it is part of S.E. Smith's Magic, New Mexico series, which has books written by many different authors. Charly's story came to me while I was still writing Seducing Sela. My family was watching a TV show about alien experimentation and my thoughts immediately shifted to Charly, in that lab, finding an alien shapeshifter and doing her best to free him. I know I would!

Charly's life has never been what one might consider normal. Living an uneventful life, she had nothing to worry about other than the occasional wardrobe malfunction--until recently.

One day, after she accidentally grabs her boss's lab coat and ID card, she has access to secret labs she shouldn't see--and test subjects she shouldn't know exist. Almost immediately, her status changes from lab assistant to unwilling test subject.

Held against his will, Xeno Brewerigeron has been abducted, and they've managed to find out he's an alien. His chances at survival will surely spiral downhill if they find out he's also a shapeshifter. Defenses shredded, he's about to lose all hope until a luscious scent wakes him, revitalizes him and ignites a fire he had long since lost hope of feeling. One whiff of the gorgeous woman staring at him through the thick glass of his cell, tells him she is the only woman who can be his mate.

Other books by Tianna Xander (more)

Charly is a big beautiful woman, though she doesn't think of herself that way. While working her dream job in a lab, she accidentally grabs her bosses lab coat when he sends her out for his lunch. Like that's HER job.

While walking down the hallway, she gets lost as doors open for her that shouldn't have, but she doesn't realize this as her lazy boss keeps texting her. She gets lost within the corridors of the lab and the action ensues.

I love the way Ms. Xander takes two people who seem to have nothing in common and throw them together. I also love the way Xeno take care of her right from the beginning. He knows she's his mate and that's all that matters. To him, she's the most beautiful and stunning woman in the world. Isn't that what every woman wants from her man?

All in all, this was a fun, fast read that I couldn't put down. [by Melody]