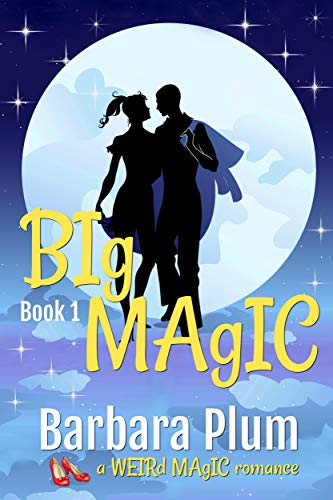 about this book: The idea for a book about witches and warlocks percolated in my head for at least five years. At the time, I was hooked on the Charlaine Harris Sookie Stackhouse series. But, frankly, vamps and weres and demons more or less turned me off the funny dialogue and crazy plots.

After more than a year spent writing a dark, psychological thriller series, I was ready for a change. I used a pseudonym (AB Plum) and felt a little disoriented from writing about more than one psychopath in The MisFit Series).

In the meantime, the witches and warlocks kept whispering to me. And frankly, I began to rethink the whole idea of misfits in our world. Then I saw a magician on a cruise ship and magic started seeping into my consciousness. Somewhere in there, I saw The Wizard of Oz for the umpteenth time and read Wicked by Gregory Maguire.

A question popped in my head: What if the great-great-granddaughter of Dorothy Gale met and fell in love with The Uncrowned King of Right-Thinking Witches and Warlocks? Obviously with her witch-slayer's DNA, she's not going to be accepted by his kin. Just as obviously, her family won't care much for a warlock--even if he is of royal lineage.

Once I figured out Thea's black cat, Toto, offers the perfect way for Thea and Magnus to meet ... well, the story took off. The red shoes--in Weird Magic they're stilettos--appear on the first page. They offer an opportunity for lots of fun. And fun was what I wanted--no blood, no gore, no murders, hints of darkness, but nothing deeply psychological.

Here's what one reader says:

• "The dialog between the characters was funny and quick, as well as the mental thoughts and mental dialog."