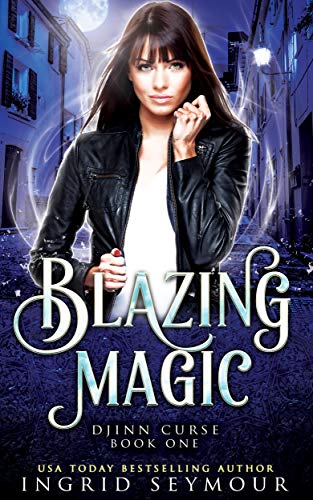 Book: One Wish Away (Djinn Empire Book 1) by Ingrid Seymour

about this book: Marielle Iris believed her grandpa when he said she would inherit his wish-granting Djinn when he died.

That was a while ago, though, when she was little and naïve and happy. Now she believes in completely different things like lousy ex-boyfriends, dead mothers, and alcoholic fathers who abandon you.

But when Grandpa suddenly dies and her mourning tears seep into the magical stone tablet that imprisons Faris Nasser, a dark, sexy creature she's been warned never to trust, everything changes. How can she choose three wishes? How can she be selfish and think of no one else when she has such power at her fingertips? As Marielle struggles to come up with the right decision, the Djinn beguiles her with his drop-dead gorgeous looks and tantalizing magic, stalling her to prolong his freedom. But she knows better than to trust romantic advances, especially from arrogant, mythical beings who are accompanied by threatening mysteries that put her life at risk at every turn. What she doesn't know, however, is that she has unwittingly inserted herself into the middle of a centuries-old mortal conflict between two spell-bound Djinns. They both must break their curse to regain their freedom, though Faris's brother, Zet, is also interested in revenge, which involves trapping Faris for all eternity by killing his new master, Marielle.

Desperate to stay alive, Marielle devises a plan to defeat Zet. But when the deranged Djinn kidnaps her best friend, she's faced with the difficult choice of saving Faris, the irresistible Djinn who has managed to steal her heart, or sacrificing someone she cares for.

Video: ONE WISH AWAY Book Trailer