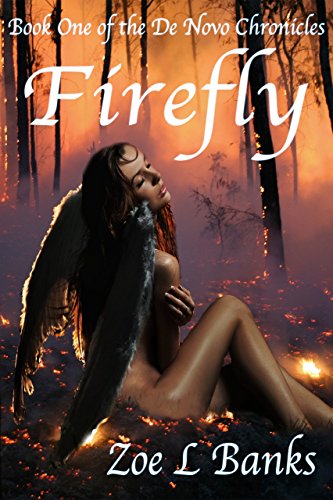 Book: Firefly - Book One of the De Novo Chronicles by Zoe L Banks

about this book: Since the Pneuma War the heteromorphic community has come to an understanding, a balance between the malignant powers of daemons, angels and the de novo - humans with mutations that make them dangerous in their own right, but one woman might threaten the decades of peace. She's an anomaly, stronger than them all and there are those who would kill her to keep the balance, even though she still thinks she's human.

Nani's only goal is to be something more, to make something of her life despite the circumstances of her past. But trouble seems to follow her and when a handsome stranger comes into her life saving her from an unknown assailant her small world of danicing in dive bars and working two jobs to make ends meet comes crashing down around her. Now all she wants to do is stay alive and Nani wonders if her handsome savior in the expensive suit is here to help her or destroy her.

Jackson isn't used to letting his emotions get the best of him. He's an ancient vampire that helped create the Concilium, an organization that keeps the peace between the heteromorphic species, but when he meets Nani his normally impecible self-control crumbles as the black haired vixen puts him under her spell. When Jackson learns what she is and the magnitude of her power, he must protect her from everyone, even if that means letting her go.