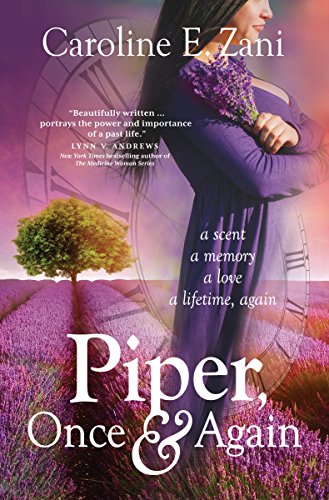 about this book: Have you ever read a book that changed the way you viewed the world around you? Writing Piper, Once & Again certainly changed the author! Sometimes art imitates life but this was a case in which life imitated art. The author wrote the book in 76 evenings and truly had no idea what she would write each evening until she was at her computer. The story was there for her to see clearly and she gratefully captured the scenes, scents, emotions, faces and trials that these characters lived. Zani was living a very "normal" life at that time and was intrigued by this process but didn't think too much of it though as she sat sobbing and saying good-bye to these characters that felt like family, she guessed perhaps there was more to this story indeed. She did, however, shelve the manuscript not knowing what exactly to do with it.

A year later found her broken and breathless after surviving a life altering rape that she felt she could/should keep secret. It was on a particularly difficult evening that she sat at her computer only to have the manuscript fall onto her tear soaked lap. The incredible journey that has taken place since is nothing short of miraculous as the author is now embracing her intuitive gifts and working as a psychic medium, helping people from all over the world embrace their own storm and understand that there is so much more to life and the bigger picture. Everything happens as it should and had Zani never had such a traumatic experience she probably would have continued on with her "normal" life. Perhaps the manuscript would still be collecting dust and perhaps she would still be working a mundane job and existing in a loveless relationship. The author knows this book has a way of finding itself into the hands of those who need to borrow the hope and light that fills its pages. And perhaps, just perhaps it will inspire others to embrace their own gifts, whatever they might be.