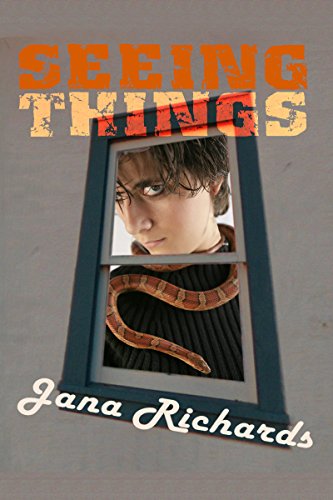 about this book: I started writing Seeing Things with a ‘what if’ question, or two, in mind. What if a psychic ‘saw’ the kidnapping of a child? What if this psychic was desperate not to have her visions anymore? I thought about what it might be like to have visions, to have access to information that you don’t necessarily want to have. I thought that I would be a reluctant psychic, just as Leah is. She just wants to be ‘normal’.

Leah’s visions aren’t always very clear, which makes them especially frustrating for her. Her vision may be a metaphor for something else. She wonders what good these visions are when they don’t seem to help anyone. The last time she tried to help a child it ended very badly. Leah’s grandmother, who is also psychic, tells her that until she truly embraces her psychic powers, until she accepts herself, she’ll never truly be happy.

My hero, David, doesn’t believe in psychics. He thinks Leah could only have information about his nephew if she was involved in the kidnapping. She must have seen him in the flesh, not in some ‘vision’. But when she tells him things he’s never told anyone in his life, David is forced to admit her visions are real. She helps him come to terms with events from his past. As they search for David’s missing nephew, they begin to believe in each other and in themselves.