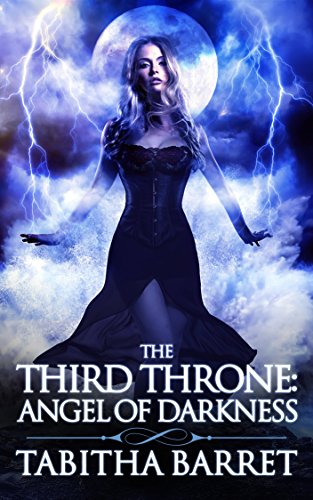 Book: The Third Throne - Angel of Darkness by Tabitha Barret

about this book: The Third Throne is a paranormal romance series that will span a total of twelve books. Angel of Darkness is the first book that starts off the series. Michelle Black thinks that she is crazy for being able to see the sins of men and has horrific nightmares of Hell, but she soon discovers the reasons for her strange abilities. The Angel of Darkness will do anything to possess her, but she is unsure of his true motivations. Does he truly care about her, or will he use her abilities for his own evil reasons?

The simple idea of a young woman succumbing the devil and becoming his servant came about when I was in high school. I tried to write the story in my head, but placed it in the Fantasy genre, which I'm not as comfortable writing about. Once I figured out that it should be a Paranormal Romance, the series came to life.

The first three books of the series where written at the same time, though I focused more on the third book. I have so many wonderful and dangerous characters on the horizon that I wanted to play with them first, so it has taken three and half years to complete the first book, Angel of Darkness. The first book sets up this new world and the rules for the series, so at times, it was the hardest to write. I have my starter characters and had to figure out who they were before I could build the rest of the series around them.

The title, The Third Throne, refers to third throne of Hell that sits vacant beside Lucifer's Skull Throne, and the second throne occupied by Hades, who is neither Greek, nor a god. The third throne is supposed to balance out the power of the other two thrones, but as many have learned, it isn't easy to rule Hell. The person who possess the third throne must have compassion, wisdom, and be strong enough to endure the darkness that permeates Hell.

I have been surprised by the support of the people who have read the book. They love the concept and the world that I have created. I have been told that they will, "never look at angels the same way again". I hope that the story is engaging enough that readers will want to see how the saga unfolds and look forward to reading future books.

My favorite review said, "Ms. Barret writes with creative abandon, coloring outside the lines of the traditional supernatural with bold strokes and an incredible imagination."

Video: The Third Throne - Angel of Darkness by Tabitha Barret