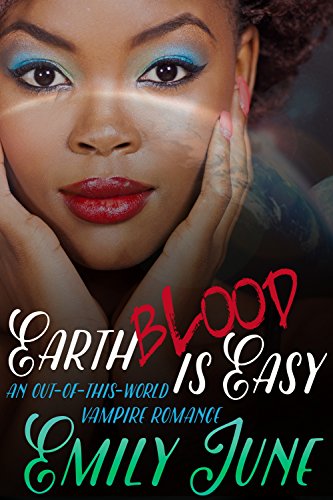 about this book: Did you know I wrote a New Adult vampire romance? I mean, romantic comedy? I mean, book about aliens who get lost on holiday and end up on boring old Planet Earth?

Anyhoo, EARTH BLOOD IS EASY has hit the market, and it's on sale for $0.99 for a limited time only. Oh, it's also exclusive to Amazon at the moment, which means those of you who are Kindle Unlimited subscribers can read it FREE!

Who ever said Earth blood was easy?

Alexxia is an unapologetic vampire who works hard and plays harder. Some of her coworkers find her abrasive, but you don't become top seller under twenty-five by being a polite little wallflower.

When Alexxia's vacation rolls around, she's got big plans for a sunny beach holiday on Planet Plai. Too bad her interstellar module has different plans. It breaks down on Earth, and she's stranded without a blood source. What a buzzkill! Especially since boring old Earth is nothing like her home planet, where you can walk into a restaurant and order blood by the glass.

Earth vamps are totally shady about their drinking habits. It takes forever to find a vampire club, but Alexxia's search leads her to Conrad—a guy unlike anyone she's ever met. He's thin and pale and broody and… actually kind of cool. But why are Earth's vampires so secretive about craving blood? Why's it so taboo? And why does doing something that's considered wrong feel so knee-bucklingly, heart-palpitatingly right?

Will Alexxia find herself seduced by Earth's forbidden underground culture? And even if her module gets fixed, how will she ever be able to leave Conrad?