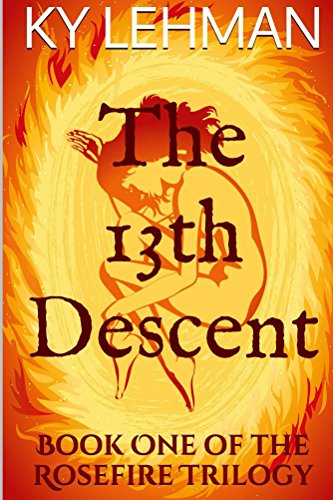 Book Reviews: The 13th Descent - Book One of The Rosefire Trilogy by Ky Lehman

about this book: Trailblazing! In a nutshell, that is exactly who our feisty seventeen-year-old protagonist, Ren Avalon, is: now on her thirteenth lifetime, she is a very well-practiced trailblazer, even though she doesn't remember or acknowledge that about herself until her mother and grandmother are murdered and she learns she is last of the legendary Three Roses. Consistently loved and supported throughout the centuries by the privileged few who have seen behind the armour, together with the experience, and the baggage, of the twelve 'her's' before this one, she has to find a way to finally win the bloody war against her ancient enemies, the Bloodstones, as she battles with the weight of her history, her family name, and the feelings of the men who love her.

• Who are the primary readers of your book?
Tweens all the way through to those in the twilight of their lives who love a hardy dose of adventure, conspiracy, romance, and the paranormal.

• How long did it take to write it?
A decade of research and thinking on it, followed by eighteen months of nabbing an hour here and five minutes there during the school terms and writing flat out during the school holidays!

• How did you come up with the title?
I titled Book One, THE 13TH DESCENT, because we are introduced to Ren, her past, and most those who have stuck by her since the very beginning during this, her thirteenth lifetime on Earth. I named the series, The Rosefire Trilogy, because the Three Roses is the whispered name Ren and her matriarchs have been referred to throughout the ages, and 'fire' for all of the Roses that came before and after her who were seen as a threat and burnt at the stake. I am currently halfway through writing Book Two of The Rosefire Trilogy titled, THE 13TH BRIGADE - after you read Book One, you will soon understand why I have given Two this title!

• What inspired you to write this book?
When a family member suddenly died young, I started to question what I believed in, and found that as a free thinking adult, the answers provided by the religion I was raised in wasn't enough. So, I read, and I researched all of the religions I could think of, and although I found that every faith has its own beauty and wonder, other questions were then raised: Man's rules? God's rules? among many others. In short, Ren, Mike, Josh, Benni Dhoo, and all of the other personalities introduced in THE 13TH DESCENT each represent a piece of the puzzle I am still trying to put together, as they all find their own way to the one true constant of every era, country and religion that has ever existed.

This book was great! I was a away for a couple of days and kept it for some me time. I read it within 24 hours! l CANNOT wait for the next one. [by Paula]

Author has much potential

Great novel that has a lot of potential to be a great trilogy. The ideas and concepts are different spin on the fantasy genre. At times the story line was confusing and became very difficult to grasp what was going on. This story is for readers which posses good comprehension skills, and are able to understand abstract ideas. May not be suited to teenage age group though younger adults with higher understanding of literary devices and principles may to be able to grasp the plot.

I encourage the writer to continue writing and explore these themes which have much potential to make a best seller. Though to improve, try and capture younger audiences as they are the key to fantasy novels in this day and age.

Original. Unique. Based on myth or history? Honestly, I think its a bit of both. Loveable: Mike! Ren! Josh! Benni Dhoo! And many likable and loathsome characters that tell the story of a long living protagonist who refuses to back down, the Archangel Prince who has watched over her with his whole heart and soul since the very beginning, and her very first love who returns in the twenty first century to remind her of the connection they once shared all those lifetimes ago, all while gets a grip on who she was, and whi she is today, and prepares to fight the thirteenth and final battle against her ancient enemies to finally win the bloody war in the name of all her kin they have murdered throughout the centuries. Something is always happening! It's a novel you wont be able to put down. Please hurry up with Book 2, Ky Lehman! [by Leah]

Was hooked from page 1 of the Prologue. I read it in a week. Loved everything; every adventure and especially every twist. Cannot wait for the next book for all these questions to be answered!

Couldn't put it down

I was captured right from the start, I love the characters and felt like I was in the book with them. Can't wait for the next one. [by Roxanne Conroy]

I really enjoyed the characters in this unique storyline. I was captivated till the very end. I'm really looking forward to reading the next book. [by Angela Wright]