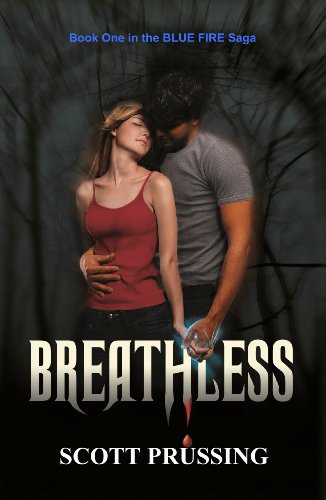 about this book: Breathless is a paranormal romance novel with a twist (actually, several twists!) It is the first book in the 5 book (so far) paranormal romance series The Blue Fire Saga. The story is set in modern day Connecticut, at a college.

"It all began with a one-fanged vampire" is the catch phrase a reader came up with to describe the series, and it is quite fitting. Leesa Nyland's entire childhood has been dominated by her mother's claim that she was bitten by such a creature. While Leesa does not believe in supernatural creatures like vampires, she can't help but be fascinated (and repelled) by the idea. She also doesn't believe in blue fire, people who live for centuries, or kisses that can kill, but when she goes off to college to search for her missing older brother, she encounters all that and more.

Leesa's quest to find her brother brings her together with Rave, a handsome and mysterious guy whom Leesa begins to fall in love with. She knows Rave likes her a lot—so why won't he kiss her? Rave is a volkaane—a supernatural vampire hunter who slays vampires by means of a magical inner fire. Unfortunately, that same fire could kill Leesa if he loses control during a kiss.

Leesa also meets Stefan, an enigmatic vampire who wants something very important from Leesa. She doesn't know what it is, but hopes she can use it to rescue her brother. When she finally learns what Stefan wants, Leesa must make the most important decision of her life.

Filled with romance, passion, suspense and warm humor, Breathless (and the rest of the Blue Fire Saga) is a must read for any paranormal romance fan.

• "Breathless is a truly captivating read. The characters are impossible to forget." ~ VampireRomanceBooks.com

• "Breathless is a book you will fall in love with and want to read over and over again." ~ Bite This! Vampire Book Blog

• "Breathless takes you on a spellbinding adventure. The characters are amazing." ~ SassyBookLovers.blogspot.com

• "Breathless is for sure a page turner. When I finished, I wanted more. I can't wait for the sequel." ~ Paranormal Book Club

• "I could hardly put it down. The chemistry between Leesa and Rave is wonderful—they play off each other brilliantly. I can't wait for the next book." ~ ReadersFavorite.com