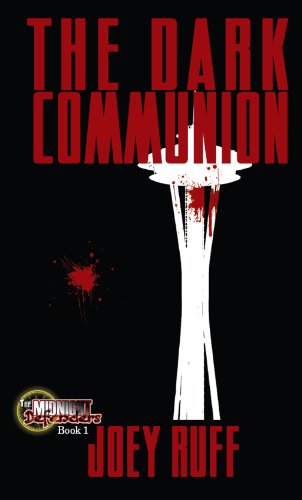 Book: The Dark Communion (The Midnight Defenders) by Joey Ruff

about this book: Twenty years ago, after his daughter died, Swyftt turned to the priesthood for solace and comfort. What he found, instead, was a life filled with the worst monsters imaginable. After being in a coma for three months, he woke, told the nurse he'd just spent three days talking to God, and walked away from the church forever.

Now, he's a grizzled, burnt-out PI in Seattle, WA. As he struggles with his current caseload of missing children, he can't help but think of his daughter, Anna. His partner says he can't save her, that she's gone, but in a world where monsters exist, gone may just be one perspective.

As Swyftt embarks on a quest to save Seattle's missing children, he must unravel the secrets of an Autistic boy's imaginary friend and fight off an army of canabalistic hobos, but what he finds is only the beginning of a mythic, world-spanning adventure.

The Dark Communion is the first book in The Midnight Defenders series. Book 2, The Stars Never Rise, is also available, while Book 3 is expected in 2014.