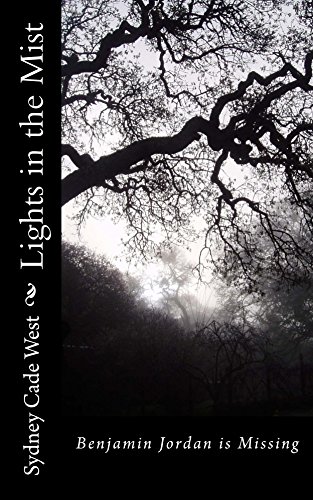 Book: Lights in the Mist by Sydney Cade West

about this book: Writing a book is the best part - not the hardest. The hardest part is the technical stuff; keeping up with dates, times, places, characters actions and interactions with other characters, and the formatting. Even in fiction, something about the setting should be real; time, weather, and distances etc. Get all of that right and the book will begin to flow. So, yes, I research the background of my books and I do it all online.

'Lights in the Mist' was my first published book, and something real did happen the night the idea of this book was born. A 'truck' did come across the field next door to my house - right down to the fence line. The left headlight was out but the amber parking light was burning. At least that's how it seemed to us. A neighbor called the landowner and he drove out and looked around, but he didn't see anything. He figured it was probably the lights on the house across the road from the field, and an optical illusion in the mist that made the lights appear to be moving. That's the answer we settled for in real life, but my imagination didn't settle for it. Was it a ghost truck? A ghost driver? So, Lights in the Mist began to take shape and the main characters Benjamin Jordan and Mary Beth Allen took form. If you like romance, mystery, and the unexplained, perhaps the impossible, then you'll like this book.

When Mary Beth discovers that the truck she was seeing in the field near her house had belonged to Ben Jordan, a neighbor's son who had apparently driven it off a river bridge two years earlier and was never found or heard from again, she can't let it go. The night when the man actually talks to her, asks for help, and tells her that 'They got it wrong,' well, that does it. She has to find out what really happened to Ben Jordan no matter what it takes.

To add to the mystery of this book, what happened next was a little nerve wracking. I saw what appeared to be that same truck with a damaged headlight several more times after that first night, but I still today don't know what it was. It really didn't seem to be there at all when somebody actually looked, and eventually, a few months after the book was written and published, about a month before Christmas in 2012, the lights in the field went away and I haven't seen them again . . .yet.

But whenever I go out on my deck at night, the lights at the house across the road from the field are still burning; one bright light and one smaller amber light. I have no idea who lives there. I don't want to know. I just pretend that the story of Ben Jordan and Mary Beth Allen is real. I can tell you this much, and this is real. The lights on that house never move. The lights I saw in the field last year . . . did move.