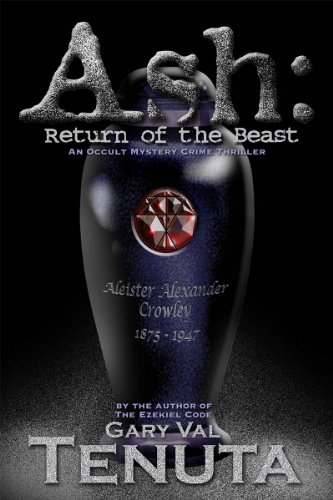 Book: Ash - Return of the Beast by Gary Val Tenuta

about this book: I was browsing through a second-hand bookstore one day and came across a biography of the notorious British occultist, Aleister Crowley (1875-1947), the man the British press once labeled as "The Wickedest Man In The World". Having had a long time interest in all facets of the supernatural, paranormal, and generally anything that resonated with those topics, I was familiar with who Crowley was, I knew he identified with the number 666 and often referred to himself as "The Beast", but I'd never read a full biography about him. I paged through the book and, toward the end, my speed-reading eyes almost passed over a remarkable little factoid that I'd never seen before. I suddenly stopped and took a second look to see if it said what I thought it said. It did.

According to the biography (and I've since found the same information elsewhere), Crowley's body was cremated upon his death. Curiously, however, the urn containing his ashes mysteriously disappeared. Its disappearance has remained a mystery to this day. When I read that I thought, wow, if that isn't a great set-up for a supernatural tale, I don't know what is.

This idea wouldn't leave me alone. I mulled it over in my head for days, maybe weeks, trying to come up with a good story based around this intriguing little bit of Crowley trivia. Eventually, it came to me and I couldn't wait to get started. Three years in the works, it finally emerged as Ash: Return Of The Beast, a supernatural serial killer chiller steeped in the occult and drenched in esoteric lore. I knew I had something here, something even better than I imagined it would be. As one reviewer confirmed:

• "Rivals the best I've ever read by Stephen King, Peter Straub, or Dean Koontz. Hell, Clive Barker would be proud of this one. Yes, it's that good." — Jeff Whelan

So, is it a horror story? Well, yes, but not in the gory slasher manner that we've seen so much of over the past couple decades. It's more the quiet, subtle sort of horror that creeps up on you, gaining momentum, pushing you further and further into the darkness until you have nowhere to run. As one reviewer put it:

As many novelists will tell you, sometimes the author thinks he knows how the story will end. But, as the characters begin to take on a life of their own, the story can evolve in directions the author never anticipated and the ending can turn out to be something quite different from what was originally planned. Such was the case with Ash. Another reviewer said:

Believe me, as the author, no one was more surprised by the ending than I was.

The story begins with the death of Crowley in 1947 and provides a surprising answer to the disappearance of the urn. Then the timeline shifts to the 1990s and the emergence of a death-metal musician, with the unlikely name of Rodney Duckworth, whose path to fame and fortune is curiously linked to the mystery of the missing urn.

Finally the story shifts to the present day where Brian Kane, a gruff and gritty street-worn Seattle Police Detective, reluctantly teams up with the mysterious Rowena Ravenwood, an attractive and rather unconventional female FBI agent assigned to a most unusual investigative unit. Their task is to figure out why good, healthy, God-fearing preachers in their fair city are suddenly dropping dead... one at a time... nine days apart.

As the intense and baffling investigation continues, Ravenwood cannot help but suspect Detective Kane is holding something back from her. What is the disturbing secret that he's holding so close to his chest?

The investigation catapults Kane and Ravenwood headlong into life-threatening situations as they feel their way through the strange, dark labyrinth of the world of the occult and find themselves battling for their lives against the powerful forces of ritual magick.

A bloody carnage of an unimaginable horror is about to be unleashed upon the world. The survival of the entire human race hangs in the balance and the clues to help solve the case are in desperately short supply. Worse yet, so is the amount of time left to stop the mysterious killer's reign of terror before all Hell breaks loose. And – according to Special Agent Ravenwood – that's not just a figure of speech.

• "It threw me for a literary loop, and I could NOT put this baby down!. The characters are very realistic... the plot is amazing. The twists in this story were terrific." — J. Wall, photographer

• "I was hooked by the end of the first chapter and literally unwilling to put it down." — Nikki, book blogger at Close Encounters With The Night Kind

• "A riveting occult crime thriller. I couldn't put it down." — Rai Aren, author of Secret Of The Sands

• "Filled with magick... at times drawing one into the evil." — Ellen In Atlanta, amazon.com reviewer

• "If you are a fan of Stephen King, you would like this occult thriller. It's not quite explainable and you can't tear yourself away." — John C. Stipa,

• "A page turner... dragging you into a world where few authors have successfully gone... to the Gates of Hell and back! The thrill ride alone is worth the purchase." — Valerie Bowen, author of the Mind of a Madman series

Video: Ash - Return of the Beast by Gary Val Tenuta