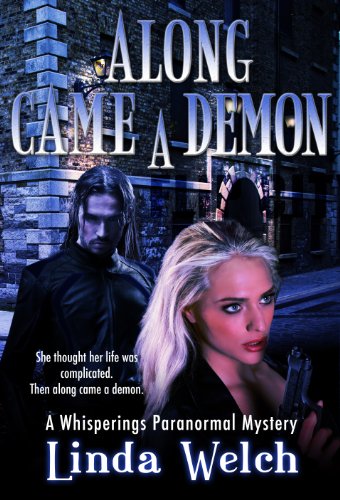 about this book: I wanted to write about a woman who saw ghosts, and how these ghosts helped her to solve cases which ranged from missing persons to murder. My first thought was, I don't want her to be swamped with ghosts who intrude into every aspect of her life; so, she sees only those who died through violence. I wanted these ghosts to be so real to her that she had difficulty distinguishing them from a living person, then decided there must be a way, or how would she know they ARE ghosts? I decided their faces would be frozen in the expression they wore when they died. And, their voices would be mere whispers to her. In 2009, Along Came a Demon, book one of the Whisperings series of paranormal mysteries was born.

Where the series title, Whisperings, came from is obvious. But the demon? That would be Tiff Banks' new partner, Royal Mortensen, an Otherworldy man who may or may not be 100% human. Tiff is one of the rare people who can see through his supernatural glamour. Although, as it turns out, Royal is not a demon.

Along Came a Demon was supposed to be a one-off novella, but much to my surprise, readers wanted more. So I wrote a sequel. In 2010 I updated Along Came a Demon and The Demon Hunters to make them full-length books. And readers still wanted more. So I gave them more. There are now six books in the Whisperings series, and the series went in directions I never anticipated when I first put fingers to keyboard. Tiff, Royal and supporting actors developed into twisty characters with histories and agendas, dark sides and light, and the plots came thick and fast.

I hope the series entertains readers. I hope it makes them laugh, occasionally cry, roll their eyes at the characters' antics and enjoy Tiff's and Royal's interaction. They tell me they it does. And they say they enjoy that in each new book, they can look back to a clue in a previous book and think, "ah, so that's why Linda put that in there."

Along Came a Demon is the beginning of Tiff's discovery of her true identity, where she came from, and what she really is. It's a crazy ride.