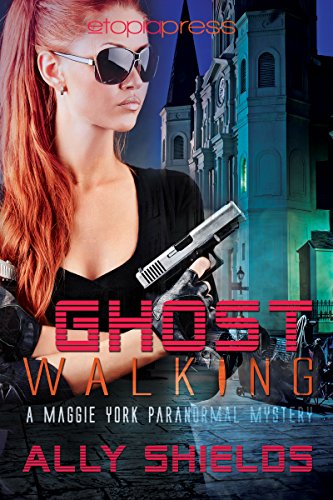 about this book: I was so fascinated by New Orleans during the writing of the Elvenrude Trilogy (and research visits) that I couldn't abandon the setting when I started this new series. What better place to set a ghost story?

Homicide Detective Maggie York died from a sniper's bullet only to be revived in the ER. When she first woke and claimed to see and hear ghostly beings, no one thought it was more than drug-induced hallucinations. But the sightings continued and Maggie was placed on medical leave, diagnosed with PTSD.

Six months later, the ghosts still appear now and then, but she's quit talking about them. A part of her believes she's crazy or getting there, because everyone knows ghosts don't exist.

Doubting herself, forced to stay away from a job she loves, she sets out to discover the only answers that still matter: Who wanted her dead? And Why?

She has one name, a witness who was there that night, but when she finds him, he's been shot to death. The detective working her case catches her at the new crime scene and warns her to butt out.

Even worse, the witness's ghost follows her around, popping up when least expected, and a strange woman, claiming kinship and a family heritage of witchcraft, tells Maggie the ghost wants his murder solved.

Desperate to find her own would-be killer, Maggie wants all of them to go away. Of course, we don't always get what we want.

This novel is a paranormal mystery, a police procedural with a ghostly informant and a touch of romance. It is intended for an adult and teen audience and contains no explicit sex scenes.