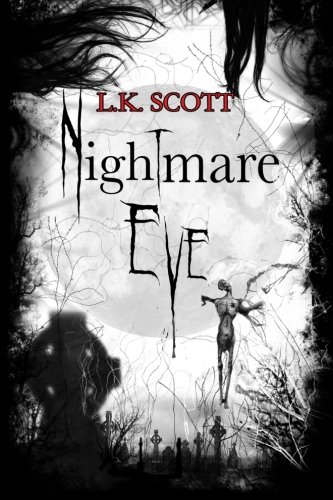 about this book: A ritual performed on the Eve of Nightmares will plummet the town in eternal darkness. . .

After waking from a nightmare, Evelyn Harris can't remember how she arrived in the sleepy town of Amherst. Even worse, her fiancé and daughter are still missing. Her only clues are a wallet made of human flesh, a prescription bottle and a teenager's warning, "Don't go out after dark!"

As night approaches, Evelyn realizes there is something terribly wrong in the woodsy village. And it's not just the deserted streets or the lingering fog.

One by one the citizens of Amherst are violently murdered, fearing a killer known as the 'Executioner' has returned from the grave. As vengeful spirits and horrific monsters stalk the streets, Evelyn and the remaining survivors seek shelter in back alleys and abandoned shops.

Evelyn must fight these nightmare creatures and solve a series of cryptic puzzles in order to find her missing family, or live—tormented in Amherst, forever.

Nightmare Eve is a grim parable of how our personal relationships are influenced by the current economic situation told through the perspective of a young business owner who has to make heart-breaking choices with terrifying results.

I was inspired to write this novel after reading about ancient traditions in small villages all over the world. In my research, I read about a town in Eastern Asia that performs a ritual every few years to ensure the health and agriculture of the town. In the night on the eve of this ritual, a select group of citizens in ceremonial robes climb the mountainside. What they do was very mysterious. I found very little information about the specific details, only that once the ritual is complete, one of the male cult members is chosen to ring the gong that echoes down the mountainside and through the town.

According to the legend, a smug woman insisted in participating in the ritual, and without the other's knowing, she snuck up the mountainside and rang the gong, ultimately cursing the town into poverty and hunger.

I thought the story was unique and very intriguing. I started dwelling on it and considered the amalgam of a modern town in the United States with the ancient traditions of an Asian village.

What if, driven by the need for success a business woman is faced with the decision of saving her family, or sacrificing them to prevent a town from being ruined, forever? And thus, Nightmare Eve was born.