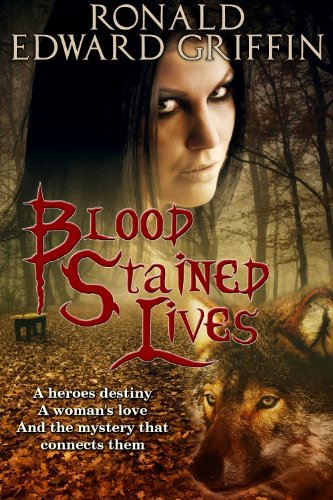 about this book: Blood Stained Lives is a story about one young man's transition from losing his parents at a young age, to learning that he is one of the last in a long race of gifted werewolves that protect humanity from demons, losing the people closest to him, and then finally finding a new family within a pack of skin walkers. He also meets a mysterious vampire Aluana which he doesn't realize when he first meets her, but their lives are connected. Meeting her unlocks mysteries from both their pasts, and their love helps them discover the power that they truly have within themselves. Together with the skin walkers they must fight great odds against various demons, vampires, and even a dragon bent on bringing hell to our world.

My novel took me a little over half a year to complete, I will tell you this though it has been a very interesting, and emotional experience. It has a wide range of characters that add seriousness, drama, suspense, mystery, love, passion, and a lot of humor to the story. I would have to say two of the most entertaining characters of this story from a humor aspect would have to be Brice (a skin walker that always has a wise crack or a one liner) and Oz the gremlin who is the last of his kind. Now Oz I created him on a whim and he turned out to be one of the more popular characters. He doesn't speak but his actions and personality speak for him. He also has great power that you wouldn't expect from such a small creature.

I figured that the title Blood Stained Lives was an appropriate title because the main character Namon has a lot of unhappy events that have made him into the hero that he has become today. If not for his blood stained life he wouldn't have had the experience that he needed to save our world from the demons that threaten it.

Of course what is a story like this without the classic bad guy? Cyrus is a vampire who was in love with a higher level demon whom was slain by a previous White Wolf. Her last wishes were for her brother the demon dragon Galamythe to be brought back to this world to enslave humanity and to wipe out her other brother's forces. Cyrus is ruthless and relentless slashing his way through anyone that stands in the path of his goals. Namon's parents and godmother being the driving force for Namon to seek out revenge against Cyrus.

I would have to say though that my favorite part of this story is the telling of Namon finding happiness, and love through an unlikely manner.