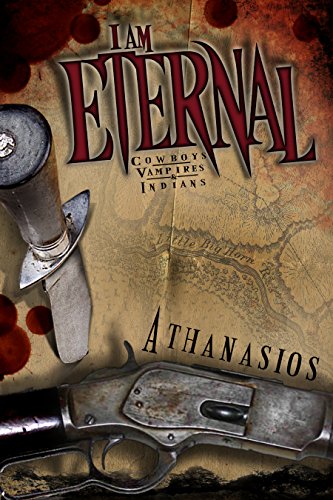 Book: I Am Eternal - Cowboys & Vampires by Athanasios

about this book: This book is about Simeon Magus, a vampire who tries to stay unnoticed. He has been undead since early Christianity and has watched how the world went from not knowing about vampires to present day where they are feared but also looked at with awe. He stays in the shadows because he fears the Catholic Church's Vatican Slayers, an elite arm of the feared Templar Knights believed to have been destroyed in the 1300s. They exist only to destroy anything supernatural in the world and Simeon has lost everyone he has ever known to them.

I was inspired to write I Am Eternal as my interpretation of the popular vampire genre. Instead of centering it on the vampires as mythical and almost wondrous creatures I wanted to show them as our predators, a more natural beast that wasn't supernatural but came about as nature's way of culling us as a herd.

I Am Eternal was a joy to write and came very easily. I took all of 2 months to write, especially since Simeon Magus already existed in my mind and in my two other books, Mad Gods & Commitment.

The cover was equally easy to create because I knew Simeon so well. I knew I didn't want to depict halloween monsters but to give an impression of the world in which Simeon lived. A world that was old and decayed but was still dangerous. I also wanted to convey his own nobility and self confidence through the title treatment.